Published by StringOvation Team on August 25, 2017 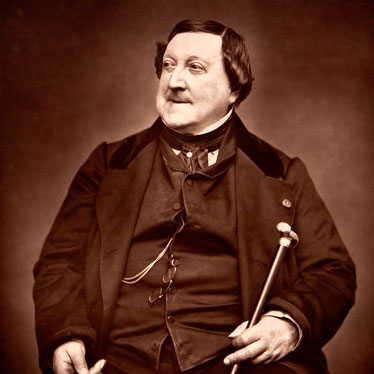 Gioachino Rossini, composer of such operatic masterpieces as “The Barber of Seville” and “Otello,” believed his last opera ­– “William Tell” – was his crowning achievement. Alas, the four-hour opera, first performed in Paris on August 3, 1829, was not a hit. In the weird way of the world, its afterthought of an overture has become one of the world's most well-known works.

Where have I heard that before?

The overture was designed to present the day in the life of a Switzerland in revolt. The prelude, named “Dawn,” starts with a slow, solo passage for the cello. As the piece accelerates, it moves into the second part, “Storm,” with the entire orchestra now fully present.

The third part, “The Call to the Dairy Cows,” starts with English horns and flutes calling to each other, like shepherds across the fields. While this melody isn’t commonly connected to the overture, it’s world-famous as a signifier of bucolic splendor. I could tell you when the third part starts in this performance of the overture, but I don’t have to. You’ll know it immediately. This melody was used by Walt Disney as early as 1937 in the animated cartoon “The Old Mill.” It’s been used in countless cartoons and movies since to indicate a state of blissful innocence.

Where “The Call to the Dairy Cows” is all light frivolity, the overture’s finale, “March of the Swiss Soldiers,” is all manic heroics on horseback. No wonder then it was used as the theme song for “The Lone Ranger.” In this finale, the full orchestra performs at a galloping pace that easily brings to mind mounted soldiers riding to the rescue. While inextricably linked now with “The Lone Ranger,” the overture has been used in numerous other popular culture works to increase the sensation of chaos or urgency to a scene.

Indeed, one of the most remarkable qualities of both these passages and their enduring popularity is how they're associated with a state of mind or atmosphere, even more than being known as part of the larger work itself. Use either passage and the audience is taken immediately to the state intended regardless of whether they’ve ever heard of William Tell or his overture. So much so, they’ve each been called a “musical cliché.”

Other classical composers have been moved by Rossini’s work here. Franz Liszt developed a piano transcription of the overture in 1838. He included the work regularly in his concert performances.

Rossini didn't write the overture until the last minute. The premiere of the opera was approaching, and he needed something. So he dug into his past works. There he found an opera he'd written 14 years earlier, "Elizabeth, Queen of England." He recycled parts of it into “The William Tell Overture.” He went back to this work again and reworked Elizabeth’s first aria as Una voce poco fa from “The Barber of Seville.”

Funnier still is that Rossini has scavenged even earlier works to compose “Elizabeth, Queen of England.”

OK, but who the heck was William Tell?

The music written about William Tell is far more well-known to American audiences than is the man William Tell. People may know he shot an arrow through an apple on his son’s head, but not much more. So…

William Tell is a Swiss folk hero and fighter for Swiss independence from Austria. Whether Mr. Tell actually existed is a question historians argue over. However, Tell’s importance in Swiss folklore and national identity is unquestioned. He’s found in works of art and statues, and sites throughout Switzerland claim various associations with him.

As the story goes, Tell was a 14th-century farmer. While in the town of Altdorf on the banks of Lake Lucerne, Tell, along with all the other locals, was ordered by the Hapsburg (Austrian) bailiff to salute the bailiff's hat, which he'd placed on top of a rod. Refusing to show obeisance to a hat or Austrian rule in Switzerland, Tell was arrested. His punishment was to shoot the apple off his son’s head.

But Tell had armed himself with a second arrow to shoot at the bailiff as revenge in case he hurt his son with the first shot. So Tell was arrested again. This time he was chained and taken to a boat on the lake. A storm came, and the Austrian crew unchained Tell so he could navigate the boat, as he was the only one familiar with it. Legend has it that he steered the boat to some rocks, jumped out with this cross bow, and then pushed the boat back into the water with the Austrian captors still on it.

True or not, it’s a good story worthy of commemoration, especially one as memorable as his own overture.