How Are Violins Made?

Published by StringOvation Team on October 28, 2019 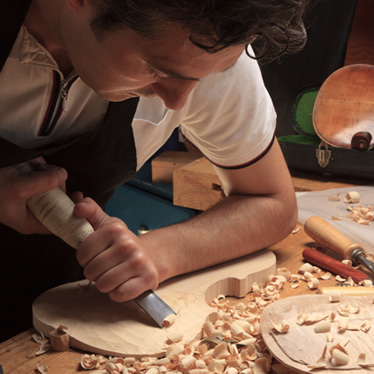 So much of what we enjoy today has ancient origins. People have been fermenting grapes into wine for 10,000 years. Baking bread goes back even farther. The way these things are made by hand varies little today from the ancient methods. The same can be said for luthiers who craft violins.

It may be up for debate who created the first violin, but most scholars agree it was made in northern Itay in the early 16th century, and is remarkably similar to the instrument we know today. By the 17th century, violins were made with slightly longer necks and fingerboards. The chin rest wasn’t added until the 1800s. What remains relatively unchanged is the materials, tools, and methods used for making a violin.

All About the Wood

Then, as now, violins are made mostly from wood. Typically it’s spruce for the top and maple for the bottom and ribs. Both types of wood are dense – but light – and can be shaved thin without compromising integrity. The violin’s neck is usually made of maple, while ebony or another hardwood is preferred for the fingerboard.

Maple is also the go-to wood for the bridge, chin rest, and scroll box. Pegs are made of ebony or another hardwood. While the tailpiece used to be made of wood, plastic is more common today.

Many of the same tools used in routine carpentry are in a luthier’s kit: saws, gouges, chisels, planes, and clamps are the most common. Tools that are essential to making violins and other stringed instruments include a bending iron and a purfling cutter. Hide glue is used to bond the pieces together

One of the most important skills needed to make a violin that produces  good sound is precise measurements.  A scientific study, that compared the Stradivari and Guarneri violins to contemporary violins, concluded that consistent density in separate pieces gives those vintage violins a superior sound. Imagine that level of precise craftsmanship 500 years ago!

Most of the work involves careful shaving of the wood to the desired thinness, and painstakingly cutting notches and grooves. We’re not going to get into every detail here, but rather provide a broad overview of how to make a violin. That said, let’s get started!

After selecting or creating a design, a luthier makes templates for the various pieces from plywood. Once a piece of maple is cut into strips, they are used to form the ribs, or sides of the violin, with a bending iron. The iron uses steam to gently make the wood flexible. Bent into shape, the ribs are then glued to blocks on a form. This is used to trace an outline on the spruce and maple that will become the top and bottom of the body.

Watch a violin being made

After following the pattern to cut out the wood for the top and bottom, the violin maker uses gouges, starting with a larger one and gradually working down to a finer tool to carve the pieces. Planes and scrapers are used to further hone and smooth the wood. The body is then rounded into shape following guides with exact measurements.

Next, channels are cut into the top and bottom pieces, followed by inlaying the purfling (three layered strips of wood) into the channels. Once the purfling is in place, the bottom is essentially finished.

When the top has been carved and smoothed, it’s time to measure and cut out the f-holes. Next up is adding the bass bar. Then the top and bottom can be joined together and the bridge attached.

Now it’s back to a good deal of gouging and carving as the neck and scroll are fashioned. There’s no template for the scroll, which is carved from the luthier’s imagination. After the pegs are fashioned, they are inserted into the neck below the scroll. At this point, the bulk of the work is done. Before attaching and setting up the strings, the violin requires several coats of varnish. It could take weeks to dry and once it does, a finish is added. The violin can now be strung, tuned, and ready to play!

Watch how a violin is set up

Even in shops where violins are mass-produced in a type of assembly-line approach, the individuals responsible for each piece work the same way as a single luthier. There may be subtle differences in the way different violins are made, but the fundamentals remain the same. Starting with the proper wood, patterns are cut out, pieces are purposefully honed and shaped and then assembled with hide glue. Like the wheel, there’s no point trying to re-invent what’s already perfect!