How Are Violin Strings Made?

Published by StringOvation Team on March 07, 2019 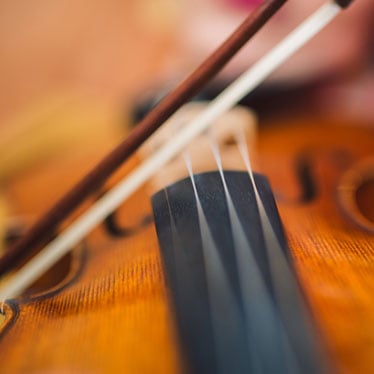 Violinists spend ample time thinking about their strings: How do I tune them? How often should I replace them? How do I get the best sound from them? And, of course, which type of violin strings are the best for me? Answers to that last question – gut-, steel-, or synthetic core - may eventually lead you to wonder how these amazing strings are made.

If you’re a perpetual seeker of knowledge, we recommend checking out, The Musician’s Ultimate Guide to Violin Strings, which dives deep into the well of everything-violin-strings. In the meantime, this article focuses on how your violin strings came to life.

It all started with animal intestines

After being expertly stretched, dried and twisted, gut strings create a rich, resonant and expressive tone when stretched taught between both ends. As gut string engineering improved throughout the decades, string makers all shared the same goal – to yield strings with enough mass to be resonant, but flexible enough that it can vibrate properly. Without the right amount of mass, strings produce a weak and hollow sound; without flexibility, the harmonics won’t be in tune.

Today, gut core strings are still used, namely by more advanced, and professional players, but they aren’t the best option for most violinists since they are fragile, temperamental, and break down faster than their steel- and synthetic-core counterparts. Your violin string’s post-core production is more or less the same, regardless of which material you select . This is because unless you’re playing period-specific gut core reproductions most lower-pitched gut strings still have a layer (or multiple layers) of fine metal wrappings to facilitate their vibration and rich tone.

Bowed instrument strings have one of three different cores – gut, steel or synthetic polymers. These cores can vary, however, depending on a manufacturer’s design and sound preference. For example, your steel core strings may have a solid steel core or the core may be made from several strands of steel that are braided or twisted together (called a stranded core).

Once the core is created, it is wound with various types of metal. The number of wound layers depends on the string’s desired sound effects. As you can imagine, strings with higher pitches are usually wound less, while low-pitched strings may have more winding layers. The number of wound layers – and the types of metals used for this process – also affect the string’s warmth or brightness. Some bass strings, for example, may have as many as five or more layers of wound metal(s) spun around their core.

While instrument strings were originally handmade, machines and software automation have changed everything about string production – allowing string manufacturers to produce as many as 7,000 or more strings per day. The machines that handle this type of work are largely automated, but their care, maintenance, and the parameters that must be set up for each string are largely controlled by human hands. Even during an individual string’s production, trained workers may have to stop and re-thread the machines or reload various strands of metals depending on the string’s design.

In a violinist.com post on how strings are made, reporter Laurie Niles writes, that while it takes workers a minimum of two weeks to be trained on the machines, “…it takes far longer, even years, to become a master string maker.” These skilled string makers work hard to achieve finished strings that emerge from the box sounding exactly as they were meant to – without requiring much time or effort to “break them in.”

If you were to peek into a string manufacturing plant’s storage areas, you’d see hundreds of spools of different metal wires, in different sizes. Some of these remain round, while others are flattened before the string’s production, which requires additional, specific flattening machines and a finishing product that prevents the flattened strings from being too brittle to vibrate effectively.

Finally, when a string is finished, the wound wires at the ends are left splayed out. At this point, it may or may not be wound at one end or the other, or both. This is called “silking.” The colors are identification cues, indicating things like who their manufacturer is, the type of string(s) within the brand, and which string it is (G, D, A or E).

Some strings are knotted or looped at the end (usually gut-core strings or the small E string), while the rest of the strings are secured at the tail with a bronze bead. At this point, some string manufacturers may apply a special compound to “dampen” the strings, making them more “play ready” right from the package.

Hopefully, understanding more about how violin strings are made will make you a more discerning string consumer, choosing strings that are made exactly for your playing level and to achieve your desired sound.