How to Convince My Friends That Classical Music is Cool

Published by StringOvation Team on August 05, 2019 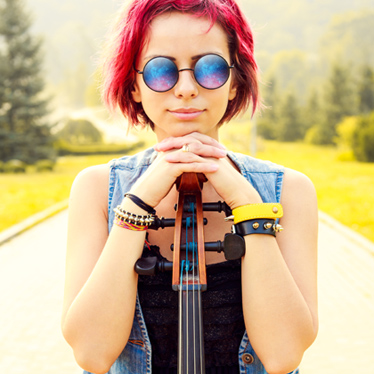 Approach any circle of friends at random and you’ll find common interests. Maybe it’s gaming, or the Marvel or DC universe. Sports could be a common thread. Books, or culinary adventures, perhaps.

When it comes to classical music, though, it wouldn’t be a surprise if you’re the lone student in the group. And that’s fine! But wouldn’t it be fun if your non-musician friends knew more about your passion than your classes, hours of solitary practice, and that you care for your stringed instrument like a mother looks after her newborn?

One way to do that is to show your friends some of the really cool things about classical music. The characters – past and present – and the ubiquitousness of the music are just a couple. Classical music has inspired artists of all kinds, from painters to writers and architects, for centuries. If you’re reading this on an iPhone or iPad (and even if you’re not), you might think the late Steve Jobs was pretty cool. Know who he thought was cool? Bach. And Yo-Yo Ma, who, incidentally, once performed in Jobs’ living room.

Let’s break down some of the many reasons we think classical music is cool:

Here, there, and everywhere

You may not have realized this before you started studying classical music and learning your instrument, but you certainly do now: Classical music masterpieces are everywhere in pop culture. From “The Simpsons,” to films of every era, orchestral embellishments in countless rock songs and hip hop mashups, classical music has not only endured, but is ingrained in the modern world.

How cool is that?

It makes perfect sense. There’s nothing like classical music for setting a mood or eliciting an emotional response. That’s why commercial artistic and musical directors carefully select the works of composers who worked by candlelight to help illuminate movie, TV, and video game scenes, and sell everything from soft drinks and airline tickets, to tablets.

Your pursuit of classical music and mastering your string instrument gives you an intimate knowledge of the genre, but your friends know more than they realize. They just need someone to point it out!

Dancing to their own beat

If Instagram existed in Mozart’s day, no doubt he would be a leading influencer. Brilliant, colorful, individualistic, and anti-authority, Mozart was a crowd-pleasing touring legend who was true to his art. He pretty much lived by his own rules. Mozart might not be the first name people think of when the subject of musical outlaws comes up, but it should be.

Now, we have multiple platforms – YouTube, in particular – available to people who want to share their talents with the world. Some classical musicians have seized the opportunity to express themselves artistically while letting their personalities shine. They also have some fun doing it and we think that’s pretty cool, too. Let us highlight a few:

Last, but not least, we want to make one more reference to the name of perhaps the first and most memorable of classical music’s coolest figures. If you or your friends missed The four-season Amazon Prime series “Mozart in the Jungle,” give it a try. Inspired by Blair Tindall’s memoir about her years trying to make it in New York as a professional oboist, the series is a fictionalized version of what it’s like behind the scenes of a major orchestra. The made up characters in the imagined orchestra give a whole new context for non-musicians to consider their classical music friends. Diverse in age and background, the characters show there’s a fun side to classical music. Also, that musicians are multidimensional and actually have other interests. Not all the characters are cool (in our opinion), but many are. More important, it shows classical music in a way not often shown – and it’s funny!

So, cool enough for you? We hope you agree we’ve made a compelling case you can share with non-musician friends that classical music is, indeed, cool. And let us add one other thing: If they’ve never been to a performance, take them to one! Maybe even to see you play.