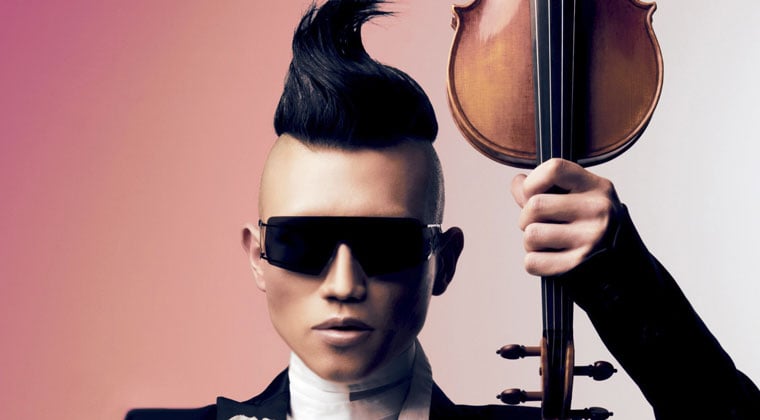 Truth: The 21st century classical string musician enjoys carte blanche when it comes to creating their own branded persona and letting their unique spirit shine through.

Korean-born Hahn-Bin celebrated his 30th birthday in August 2018. Within those 30 years, he has enjoyed a very celebrated 18-plus years of professional musicianship, including his debut at the 42nd Grammy Awards at the age of 12, honoring renowned violinist Isaac Stern.

While his story of a Julliard music degree and countless awards and concert appearances echoes other unique violinists we’ve covered – like Sirena Huang or violist Nobuko Imai – Hahn-Bin’s path stands out in a notably non-traditional way. He pushes boundaries with a persona that is as solidly grounded in superior musicianship as it is ethereal and otherworldlyness.

The Rise of the Beautiful Eccentric

Hahn-Bin, who changed his name to Amadéus Leopold, was featured in cultural critic Madison Moore’s book, The Rise of the Beautiful Eccentric – a title that aptly describes Amadéus Leopold’s professional path. Here are five ways he has pushed through traditional professional boundaries that tend to “type-cast” string musicians.

It’s true that many famous musicians have created stage names (Elton John was born Reginald Kenneth Dwight, and Alice Cooper was originally Vincent Damon Furnier), but most professional string musicians bill themselves with their given name. Hahn-Bin, on the other hand, was billed as Hahn-Bin until 2012 (age 24) when he changed his name to Amadéus Leopold (he’s still known as Hahn-Bin in Korea).

This shift correlated with his newly-acquired status as an American citizen. As quoted by classicFM.com, Amadéus Leopold said the switch had “spiritual significance,” linked to his desire to pay homage to another beautiful eccentric, Wolfgang Amadeus Mozart, as well as Mozart’s father, Leopold. Amadéus Leopold also appears to be an affinity for famous violinist Leopold Auer. He remarked, “My role in this world is to embody the renaissance of classical music itself," he commented. "I wanted to make that message clear to the world."

2. He created a physical persona

We admit that Lindsey Stirling has a striking style, but Amadéus Leopold’s persona is even more ornate. The use of perfectly sculpted (yes – sculpted) hairstyles, make-up and face paint, and one-of-a-kind fashion choices make him seem as if he’s stepped out from one of Cirque de Soleil’s magical worlds. Or, as NPR reporter Anastasia Tsioulcas described him, a cross between “Lady Gaga with "Ziggy Stardust"-era [David] Bowie.”

“What I choose to wear or how I choose to express myself visually is equally important as the music itself,” he was quoted during an interview at Le Pain Quotidien on Grand Street. “Fashion teaches spiritual lessons. It has taught me who I am and showed me what I didn’t know about myself.”

Amadéus Leopold has often identified himself as a pop-artist who chooses to express himself through classical music. Along these lines, he’s not so different than other famous contemporary string musicians that identify first with their pop or hip-hop roots, but the added avant-garde moves, mid-professional career name change, and a carefully crafted music persona set Amadéus Leopold apart from his peers.

Imagine watching one of your favorite violinists performing a Tchaikovsky Violin Concerto at The Young Concert Artists Gala at Alice Tully Hall in New York, only to see fake blood pouring out of his mouth. It was 2012, and Hahn-Bin (as he was known then) chose a visceral way to express Tchaikovsky’s tendency to wear his heart on his sleeve.

After the intermission, NYT reporter Zachary Woolfe (who covered the performance) wrote, “…Hahn-Bin entered, draped in an American flag, which he tossed aside, along with a can of Budweiser, revealing a sleeveless denim shirt over a white tank top stained with red; skintight denim shorts; and chunky black leather boots…on the back of the shirt in big pink letters…[was written] a derogatory word for gay men, followed, alliteratively, by ‘freak.’”

His physical movements were dramatic and loaded with angry and angst-filled motions that created a tangible tension with the accompanying orchestra. At the conclusion, Hahn-Bin donned a rainbow flag and, as Woolfe states, his performance, “…touchingly suggested a connection between Tchaikovsky’s aching emotionalism and his agonizing battle with his homosexuality.”

So, there is another way in which Amadéus Leopold has woven his self and his spirit into his work. He is openly queer and, as such, is a celebrated musician in the LGBTQ+ world.

Perhaps one of the most surprising things to note about Amadéus Leopold is that for all of his avant-garde showiness, artistry, and in-your-face performance style, he is utterly elusive. Unlike most of the famous string musicians we’ve featured, Amadéus Leopold doesn’t have his own website, he rarely grants public interviews, and even videos of his performances are scant.

Above image courtesy of The Visual Violinist