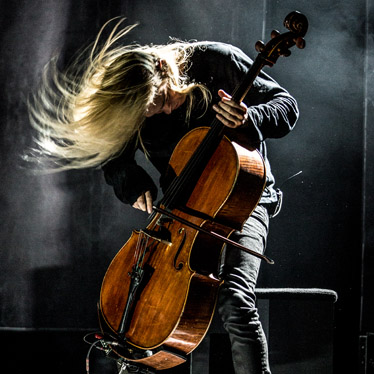 Think heavy metal and classical music have nothing in common? Read our interview with Eicca Toppinen, lead cellist of the symphonic metal band Apocalyptica, to find out how they intersect.

When one thinks of heavy metal, a cello probably isn’t the first instrument that comes to mind. Raucous guitars, booming drums, and ear-splitting vocals are some of the rock genre’s mainstream hallmarks. But more classically-minded instruments can also play a huge part in the art form, you just have to know where to look – or listen. Enter Apocalyptica, the ensemble who put symphonic metal on the map while proving why playing the cello is cool.

Apocalyptica is living proof of a string instrument's endless possibilities. Their charismatic Finnish bandleader, cellist Eicca Toppinen, makes a fitting example for those looking to branch out into different musical genres for the cello, violin, viola, or bass. The band struck a major chord with their cello-only versions of popular metal songs, and their 1996 debut album Plays Metallica by Four Cellos went a long way in shining a global spotlight on the string-loving metalheads. Since then, the group has grown in musical renown, releasing albums of original material and touring the world in the process.

Toppinen has a heart for beginning string players. In this exclusive conversation with StringOvation, the cellist and Apocalyptica frontman imparted wise words for those young performers still in training to protect their inspiration while steeped in education.

A cello can take an eager musician to the wildest reaches of their creativity, but all that inspiration must come from an initial spark, no matter the scope of the dream. For cellist Eicca Toppinen, he found inspiration in an unlikely source: heavy metal. Especially the San Francisco-based thrash veterans Metallica, who catapulted the genre to mainstream popularity in the late ‘80s and early ‘90s. As a young music fan and novice performer, Toppinen was along for the ride.

"The first time I heard Orion by Metallica, I was at orchestra camp, and my friends had the Master of Puppets album,” the cellist remembered. “I just started listening to that song on repeat! And that was Metallica's instrumental song. From there, I just dove into it and the whole metal world.”

Simultaneously, however, classical music would become "equally important” for the musician. Initially averse to the style – Toppinen recalled a childish repulsion to his father’s favored piano music—he changed his tune after one seminal work opened his mind.

“When I started to play the cello I didn't even like classical music that much,” Toppinen recalled. “But the first time I heard Symphony No. 7 Leningrad by Dmitri Shostakovich, that just blew my mind. When I heard that, I deeply understood the essence of classical music, and that’s carried on through everything I've done. Before that, I was listening to Jimi Hendrix and Billy Idol.”

That essence, as the bandleader described it, has to do with classical music’s many facets. As a wide palette for history, art, and culture, classical music has a universal reach made up of multiple parts. It’s more than a single popular genre can contain, the musician explained.

“Classical music has such different varieties of style,” Toppinen said. “When someone listens to Haydn, a new listener may say, ‘I don't like this, so I don't like classical music.’ But I think that's completely wrong. Because Haydn is just Haydn. It has nothing to do with Shostakovich or Prokofiev or Stravinsky. They all have different styles. It would be like talking about rap and metal and pop music as the same thing. But you’re allowed to say you like hip-hop, but don't like death metal."

The dual-minded approach has served Toppinen well in his career with Apocalyptica. Bursting onto the world stage with an album of instrumental Metallica covers, the cellist and his bandmates used the unlikely platform to launch a fruitful symphonic career. Today, the band is working on a new album, their ninth, and performing concerts internationally – and it all essentially started with a Metallica song.

Is there a secret to Toppinen’s success? If anything, staying true to his own ideas about music may be what’s gotten the performer this far. He understands the importance of musical education in grooming a successful musician, but he also identifies with the free spirit of inspiration that has informed his forward-thinking undertakings. Rome wasn’t built in a day, and as such, Toppinen advocates a solid classical foundation before students aim for the wilder parts of the cello oeuvre.

“This happens with every instrument,” says the cellist. “You need to learn the history of the instrument and the key compositions. You have to study. But, from the outset, it's always important to play music that you really enjoy. I've seen too many kids giving up because they've been forced to play music they don't like, and that's not the whole idea of playing an instrument or playing music.”

Past collaborations with rockers such as Shinedown’s Brent Smith and Bush singer Gavin Rossdale, show the stripes Apocalyptica have earned in the world of hard rock and heavy metal. But just like any great success story, an element of serendipity exists in Toppinen’s fruitful tale. The musician started out like any other student of classical music, learning the ropes and playing music with his buddies on the side. It was a helpful music instructor who provided the catalyst for the band’s formation.

"When we started to play metal with cellos, we were classical students, and we played classical music,” Toppinen explains. “At the same time, we were big metal fans, and I, especially, was a big metal head. My cello teacher at the time was running this six-cello ensemble, of which I was a member, and we played all kinds of stuff... Jimi Hendrix's Purple Haze and tangos and all kinds of versions of different classical songs. That's when I realized that the cello was actually suitable for lots of different music. And I started to think, ‘Why can’t we play metal as well?’”

The cellist cultivated that sonic seed by starting Apocalyptica in 1993 with fellow cello players Paavo Lötjönen, Max Lilja, and Antero Manninen. In their current band iteration, Toppinen and Lötjönen remain, alongside cellist Perttu Kivilaakso, plus a drummer, vocalist, and other touring cellists. But when they were just starting out on the performing circuit, the idea of recording the album that became Plays Metallica by Four Cellos seemed so outlandish that it was practically scoffed at. 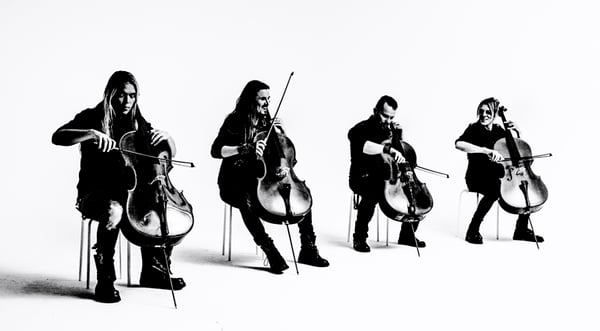 "For a couple of years, we just played a few times a year, and we never had a plan to make an album,” Toppinen recalled. “But then the rumor went around in Helsinki, where we're from, and we were invited to participate in a metal event along with three other bands. At that show, there was a guy there who had this small independent record label, Zen Garden, and he later contacted us and asked if we wanted to make an album. I remember we were kind of laughing at him. We were like, 'Are you serious? You think somebody wants to hear this on a record?’”

But the proposal was no joke, and the album celebrated its 20th anniversary in 2016 with a remastered edition containing special bonus tracks. Recalling the experience now, the Apocalyptica frontman shows a deep appreciation for that debut release. But that doesn’t mean the band was aggressively seeking such accolades with their first album venture, the musician stressed.

"We didn't really plan to form a band, we were just a bunch of friends having fun together, playing music we loved,” Toppinen reflects. “It was a very different approach from what some people may think. It wasn't like we were intentionally creating a product to sell.”

Now that Apocalyptica has become a tremendous musical force, the artists no longer need to heed the 7 Tips for Traveling With Your Instrument. But that doesn’t mean they can bring their most valuable cellos on the road. Quite the contrary. In fact, thanks to innovation in string instrument technology, the band often use standard, store-bought cellos in their live performances. Especially on tour.

"Under touring conditions, it doesn't make any sense to bring any valuable, old instruments,” Toppinen explained to StringOvation. “But in a studio situation, we use some older, better cellos. When you're recording, the difference between the quality of the instruments comes across very clearly. When you play live, the difference is not big enough to take the risk.”

He continued, "It's a great option for us because sometimes it happens that a cello gets broken, whether it’s in cargo or an onstage accident. It's nice to have an instrument that's replaceable. In every big city, you can go to a music store and find a cello and get to the show. It's a practical thing."

To that end, however, the musician maintains that they never skimp on their cello strings. Although now endorsed by Thomastik-Infeld, the musician emphasized they have always used the brand’s strings in achieving Apocalyptica’s signature sound on record and in the concert hall.

“Their Spirocore lower strings are the only low strings that really give the right punch and the right solid sound for the low C and G strings." Toppinen said. Currently they use the Versum A and B strings.

In keeping with their heavy metal roots, Apocalyptica recently covered a song by Sabaton, a Swedish metal band. Below, listen to Apocalyptica’s version of the act’s Fields of Verdun.

Apocalyptica has only two more U.S. tour dates this summer, as this goes to press.  But, if you are in Europe, Asia, or Australia, you can find their upcoming tour dates here.  You may find a spark for your own inner fire of inspiration.