Published by StringOvation Team on September 20, 2017 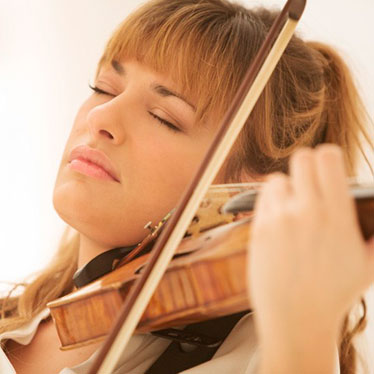 Violinist Nicola Benedetti is the rare contemporary classical musician who’s achieved a fair amount of popular celebrity outside the world of classical music. Certainly, in her home country of Great Britain, she’s an easily recognizable face. Her 2014 album, “Homecoming; A Scottish Fantasy,” made her the first solo British violinist to land in the Top 20 of the Official U.K. Albums Chart. Her 2012 album, “The Silver Violin,” was the first classical record in decades to enter the top 30 pop charts in the United Kingdom.

Her breadth of her career as a soloist confirms her global popularity. Here’s just a taste of some of the great people and orchestras she’s performed with:

Orchestras: Chicago Symphony at the Ravinia Festival, New York Philharmonic, Leipzig Gewandhausorchester, Orchestra of the Mariinsky Theatre, Danish National Symphony Orchestra, and of course the London Symphony Orchestra and London Philharmonic Orchestra. Nicola will be making her debut with the Orchestre de Paris during the 2017/18 season.

These are some of the awards she’s earned over her career:

Nicola was a mere eight years old when she earned her first recognition, being named the leader of the National Children’s Orchestra of Great Britain. Her older sister’s violin lessons motivated Nicola to start fiddling around at four years old. She’d started learning the violin with teacher Brenda Smith at age five.

By the time she was nine years old, Nicola had passed all eight grades of musical examinations at her local school in her native Scotland. At 10 years old, she began attending the Yehudi Menuhin School for Young Musicians, where she studied with Natasha Boyarskaya. During her first year there, she also had her first solo performance at the school’s annual concert at Wigmore Hall.

Throughout her career, Nicola has emphasized music education and how to expand access to it.  In 2010, she took on the role of “Big Sister” to Sistema Scotland’s Big Noise project, which provides music education and children’s orchestras in four areas in Scotland. Nicola is a board member and teaches classes through the program to encourage young musicians.

She’s described her motivation and experience with the program to The Courier: “..the sense of achievement and pride a child feels when they learn to play an instrument… Evidence and data show that the by-products of learning an instrument and playing in an orchestra lead to greater discipline as well as skills in multitasking and concentration.”

Nicola also tutors and inspires young musicians through her own project, The Benedetti Sessions, which she started in 2013. The annual program takes place over a single, intensive weekend and includes a masterclass lead by Nicola, workshops and rehearsals for young musicians, all to prepare for a public finale performance. You can watch Nicola leading a rehearsal here. Anywhere from 50 to 300 children participate in each annual session.

More recently, she held The Nicola Benedetti String Festival in partnership with the European String Teachers Association and Saffron Hall. The first day of the program is for the young musicians and their families, who get to participate in workshops and other educational sessions. The second day is for the music teachers, with sessions that explore ways to improve teaching and techniques, and a Q&A panel for teachers with a full panel of experts.

Nicola has also held a masterclass that was livestreamed on Facebook, and is still available here.

Keeping it all going

Nicola continues to practice her violin between three to seven hours a day, something she’s had to work out with her neighbors. She performs on a 1717 Stradivarius called “The Gariel,” and that’s valued at £2 million.

Her latest album is the well-received “Shostakovich; Glazunov Violin Concertos.” While just recently celebrating her 30th birthday, Nicola seems to have a lot more left to give audiences and budding musicians.