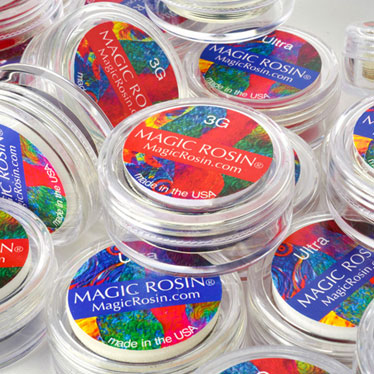 I  was always one of those players who didn't think or care much about rosin at all. I would just use whatever rosin I had around. There were a few rosins I knew I didn't like, but most commercial brands seemed about the same to me—just fine.

I’d heard about violinists in professional orchestras using swipes of bass rosin on their bows. This was very intriguing, so I tried it myself with mixed results. Though I liked how firmly my bow stayed in the string, I found the bass rosin to “hang on” for too long; it would grip but it wouldn’t let go as easily as I’d have liked. I found spicato and shorter strokes to be more difficult with bass rosin on my bow.

I started wondering about making a grippier cello rosin; one that might help sit the bow into the string without pressing, helping the bow to stay in one place on the string more easily like the bass rosin had, but one that would “let go” when needed. I decided to try my hand at making some rosin.

I already had experience in melting glass and making molds, and found that similar methods were used to make rosin, so it was quite a fun project! I started out by cooking rosin in my garage, smoking-out my neighbors who really were quite patient with all of this (one neighbor said he loved the smell of cooking rosin!). I did several months of trial and error experimentation, cooking the rosin with a toaster oven and a hot plate, and cycling through many ingredients and potential formulas.

I made silicone molds in various fun shapes in those first months. The first mold was a very large heart shape, which I still keep in the Magic Rosin “archives”.

I learned how to make what I felt were replicas of some of the standard popular rosins. I learned about ingredients that were common to most rosin formulas and some of the properties that those ingredients add to the function of rosin. I tried many different formulations at various temperatures and with various cooking techniques. I researched and discovered historic rosin recipes (now that’s a secretive field), and tried to follow the recipes as closely as possible. I learned the qualities and properties of many different additives. I experimented a lot!

It was quite a revelation! I noticed a surprisingly big difference in the playing action and sound in all of these formulas. The cooking temperature, the cooking length, the ingredient ratios, the adding of even a tiny bit of a new ingredient, all made a surprisingly big difference in the action and sound of the rosin. And to my surprise, my experience with these differences were confirmed by almost every listener and player in informal blind tests. “#1 one sounds harsher.” “#2 is smoother at the beginning”, etc.

I eventually discovered a class of ingredient rosins that were developed for and were being used in other industries (including the food industry). I found a mix of some of these ingredient rosins and a cooking technique that I really liked and a formula started to take shape.

I tried the potential rosin formula out on my students and a lot of my string-playing professional musician friends. People seemed to like the cleaner sound and grippier feel.

When I settled on a formula, I realized it was going to be almost clear in appearance. I had been a glass bead maker in the past and I come from a family of artists so I saw an opportunity to add some color and art below the rosin.

I had a lot of fun trying different colored papers and printed designs including some photographs of my dad’s paintings.

I also started making rosins with photos of my cats, and photos of friends, etc. That started a very fun element to making Magic Rosin®: the custom rosins—rosins with people’s photos or school and business logos.

Next time, I’ll talk a little about how we searched for and finally decided on our packaging. I’ll sign off here, thank you for reading, and wish you happy playing!