Published by StringOvation Team on May 14, 2019 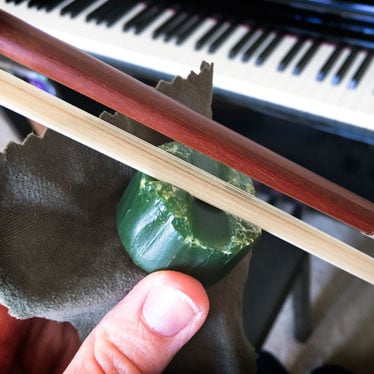 Question: What does a bow eat for breakfast?
Answer: Rosin Bran, of course!

Rosin is a crucial player on the list of string instrument accessories, with enough clout to hold a place in the annals of musician jokes. That being said, failing to find the right rosin for you and your instrument is no laughing matter, and negatively impacts the way your string instrument sounds – and feels - when you play.

Rosin is a friction-induced sound catalyst between the bow and the instrument strings. Inadequate rosining results in slick bow hair that produce barely a whisper. Over-rosining the bow makes both the bow and strings feel sticky and results in harsh and scratchy sounds. Through time and experimentation, however, string musicians learn which rosins are best for their instrument, the sound quality they desire, and the climate in which they live. More experienced musicians may even custom-select the rosin they use based on the sounds they want to achieve with a particular instrument or piece of music.

Our String Musicians Ultimate Guide to Rosins was written to facilitate new and intermediate string musicians’ knowledge of the varieties of rosins available to you and how they’re formulated. We also offer guidance regarding the proper technique for applying and maintaining rosin, as well as how to properly clean your instrument to prevent rosin accumulation on the strings and body.

With this knowledge, you’ll be able to fine-tune sound quality, and ease of bow movement across the strings, when playing your instrument.

There are many different types of rosin available. Some of the most general categories of rosin include:

Note about climate: It’s worth noting that your climate may dictate the type of rosin you prefer. The hotter and more humid it is, the softer and stickier rosin becomes. Similarly, drier and colder climates cause rosin to be firmer and slicker. For that reason, some string musicians change their rosin type by season to achieve the texture/friction they prefer.

As the three categories above illustrate, rosin manufacturers formulate rosin density and viscosity for specific instruments. The bigger the strings, the more friction required to make them vibrate. Rosins are formulated accordingly, with lighter and harder rosins more suited to violins and violas, and darker and stickier rosins formulated for cellos and basses.

Odds are, you’ll purchase rosin types based on the instrument you play, and then you can experiment within the range of instrument-specific rosins over time – and with more playing and performance experience.

To start, beginning string musicians are best off using the rosin type(s) recommended by their strings’ manufacturer. In addition to creating optimal sound from the strings you’ve purchased, these rosins will clean up the best and are less likely to gum up your strings.

Rosin is found in two different forms: boxed and caked.

Boxed rosin is made into rectangular shapes, molded specifically to fit the box they come in. They are usually smaller in quantity, and cheaper than their caked counterparts. Unless the box is customized, the shape and the extended lip of its sides are proportioned to fit the width of a bow. This makes boxed rosin a good choice for beginning string musicians – especially those who are younger, as the bow is guided by “the tracks” of the rosin box. Boxed rosin is also more durable than cakes because the box provides structure and protects the rosin from chipping or breaking.

Caked rosin usually comes in rounds or blocks. There is more rosin in each cake than the average box, so cakes tend to be more expensive. Also, without the box sides to guide the bow, it requires more control and finesse to apply caked rosin correctly. This is particularly true for musicians using synthetic bow hair, which tend to be more slippery than their standard, horsehair counterparts.

Ultimately, the decision between box or cake rosin is up to the musician.

If you’ve played a string instrument for any length of time, you’ve learned that you get what you pay for. Rosin is no exception. Rosins differ in terms of quality, so you’re best off investing a little more for a higher-quality product with a brand name you can trust. In addition to knowing your rosin is made with the highest and purest quality ingredients, purer rosin formulas mean fewer fillers, so you’re literally getting more product for your dollars.

Also, lesser-quality rosins may have additives or larger particulates that can scratch your bow or strings, compromising sound quality. Another factor worth considering is that cheap rosins may negatively impact the structural quality of your bow hair and strings over time, meaning you’ll need to replace them more often.

When shopping for rosin…

Here is a list of some of the highest-quality and most respected rosin brand names in the industry (in no particular order):

Keeping future rosin selections within one of these brands guarantees the rosin you use is reputable, even if it doesn’t become your preferred rosin type.

Rosins run the gamut from highly-formulated to completely pure, but all are made from refined, coniferous (pine tree) resin, or sap. The purest forms of rosin, like Magic Rosin, do not use any additives or fillers. Others are precisely formulated to achieve a particular consistency or level of friction.

Some of the most common additives used in rosin for string instruments include:

The additives and ingredients used to make rosin are a bit of a mystery and can be challenging to identify because rosin manufacturers consider that information proprietary, and are secretive about ingredient lists.

While we’re on the subject of rosin ingredients, it’s important to note that some string players find they’re allergic to rosin. This isn’t surprising since rosin can be made from more than 100 different species of pine and coniferous trees, including spruce and larch. Certain additives may contribute to sensitivities as well. If you find yourself sneezing or with runny/itchy eyes or nose after rosining your bow, consider switching to a pure rosin brand, like Magic Rosin, or try rosin labeled as “sensitive” or “hypoallergenic” to see if that helps.

Now that you’ve selected the best rosin cake or box for you, it’s time to apply it.

Beginning musicians love nothing more than to swipe their bows across the rosin surface – it feels so official. While this level of enthusiasm is appreciated, it’s essential for string musicians to avoid applying too much rosin, or they risk compromising their sound – and damaging their bow hair, strings or the instrument’s finish.

On the flip side, under-applying rosin causes the bow to slip around on the strings with less control and makes a more hollow, faint tone. The goal is to apply just enough rosin – and not too much –achieving enough friction to support the bow as it slides across the strings in a controlled way while producing a warm, rich tone.

Here are things to remember for proper rosining technique:

In addition to compromising sound quality, too much rosin also poses a threat to your bow, strings, and the instrument’s finish.

In most cases, with proper rosining techniques, all you’ll need to do to keep your instrument clean is gently wipe it down – body, neck, strings, and all – with a soft, dry cloth (preferably cotton or microfiber). This should be done after each time you practice or play and should include the surface of your strings, as well as underneath the strings and fingerboard. Never press down, and be very careful around the delicate areas of the instrument’s anatomy – like around the bridge and over the F-holes.

Fresh rosin dust is fine and dry, making it easy to wipe away. If it’s left for too long, rosin dust adheres to the instrument’s body. This can result in expensive professional cleaning or repair costs. Practicing “good violin hygiene” prevents you from having to polish your instrument more than once a year or so.

If you’ve been lax, and notice your instrument body has caked on sweat, oil, rosin, etc., take it to a luthier ASAP. Once adhered to the surface, caked on rosin, sweat, and oil can do serious damage. Until you’re 100% confident in what you’re doing, this maintenance should be done by a professional, as an inexperienced musician’s attempts to remove adhered rosin and general grime can cause expensive damage.

Once a week, you should also use a clean, dry cloth to very gently wipe excess rosin from the bow. Rub the cloth lightly up and down, rather than side-to-side, to avoid tangling or breaking the hair. Pay special attention to the area near the frog (the base of the bow), where oil and sweat from your fingers make rosin more likely to accumulate and gum up. And, remember, never touch bow hair with your bare fingers as sweat and oil quickly ruin the hair’s ability to play across the strings – rosin or no rosin.

If your bow seems too dirty or sticky for a dry cloth to handle, take your bow into a luthier or a music store with personnel experienced with string instruments. There, you can learn more in-depth techniques for how to clean your bow to avoid having the bow restrung until necessary.

Did you know some rosins come in custom options? Some manufacturers offer custom cases that can be branded or made with a specific player’s name or school mascot or insignia. Others offer rosin cakes in custom shapes or designs, making thoughtful graduation gifts for string musicians.

Magic Rosin is one of our favorite examples of these. In addition to being a completely pure rosin option – free of additives, fillers, or preservatives, Magic Rosin’s clear aesthetic is uniquely customizable. The cake’s base becomes the canvas for virtually any design you can conceive of, and are available in fun colors, with symbols or insignias, or can integrate your school’s name, a brand name, organization logo, existing or original artwork – and the list goes on.

Most importantly, Magic Rosin is a superior rosin product, available in instrument-specific options. It was thoughtfully formulated to require only two or three passes of the bow to achieve the desired “grip.” And, even though the cake is clear, Magic Rosin’s custom formula for cellos and basses have just as much grip as standard amber and dark rosin options.

Are you just branching out and experimenting with how different rosins feel and sound? Good for you. If you’re a violinist or a violist, try Magic Rosin’s 3G formula, which as a little more grip than other, lighter rosins. Cellists and bassists will appreciate their Ultra formula because it has more grip and “pop.”

Learning everything you can about rosins – types, application, and cleaning/maintenance – is another critical step in taking care of your instrument and eliciting the best sounds possible as you play