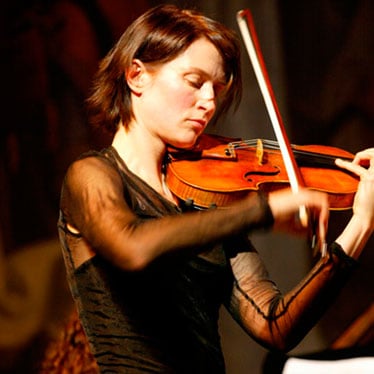 As we continue to showcase great violinists during the month of April, our next artist is Viktoria Mullova. Her career, spanning over 30 years, and her life, epitomize the struggle inherent in overcoming incredible odds in order to reach impossible goals.

Born near Moscow on November 27, 1959, Viktoria Mullova practically grew up with a violin. In a family of five, her parents avidly supported music training and she began playing at the age of four; stating in a 2001 interview with John Woodford entitled “Through the Looking Glass with Viktoria Mullova” that, “since there was not space for a piano, I was given the cheapest and smallest option, a violin.” But, despite the hardships of living in the Eastern bloc, both her father and mother supported her lessons. Her father attended with her, and she explained that he would spend time helping her practice, reminding her of each instruction, saying that she was “very lucky in this respect.”

When Mullova was nine-years-old, she was accepted at the Central Music School in Moscow, Russia’s most prestigious music school, out-performing a very talented peer group who also had political connections. This early success in classical music studies led to additional achievements. Mullova worked hard over the next decade, later earning first place in the Sibelius Competition in 1980 and the coveted gold medal at the International Tchaikovsky Competition in 1982, while a student at the Moscow Conservatoire.

Although it’s often difficult for this generation to understand the political and cultural climate that surrounded Mullova in the Soviet stronghold, she chafed under such dictatorship and had begun entertaining ideas of defection even while in school. However, finding the means and opportunity was very difficult. To prevent such notable persons from escaping, family members of diplomats (even musicians) were restricted from traveling together.

However, in 1983 at age 23, circumstances occurred that allowed her and her boyfriend (touring Finland) to drive across the border and seek asylum at the American Embassy, leaving behind the priceless Stradivarius she had played. You can learn about her experience in depth by reading the details in her recent biography, ‘From Russia to Love’: The Life and Music of Viktoria Mullova as told to Eva Maria Chapman (the Robson Press, UK 2012).

Since the time of her defection, this celebrated artist has performed with many of the world’s greatest orchestras, conductors, and at countless international music festivals.

With a performance and recording career that has spanned over three decades, this violin virtuoso is continually expanding her talent, her reach, and her music. Highly respected for her musical integrity and incredible versatility, she has explored both the development of baroque and contemporary influences. According to her website biography, interest in the authentic approach has led to collaborations with period instruments bands such as the Orchestra of the Age of Enlightenment, an outfit dedicated to expanding musical boundaries and embracing authenticity. She has a great affinity for Bach, and her recording of his solo sonatas received five-star reviews from across the globe. See an example of her performing Chaconne BWV 1004 at St. Nicolas in Leipzig, or watch her live performance of Adagio (J.S. Bach Sonata No.1 in G minor, BMV 1001) at the 2010 Holland Festival.

Mullova dove into creative contemporary music about 16 years ago with her album, “Through the Looking Glass,” which showcased jazz, pop, rock and blues inspirations, and was arranged and produced by her husband, cellist Matthew Barley. Her second album “The Peasant Girl” explored the influence of gypsy music on modern classical and jazz genres, and another recent project, “Stradivarius in Rio” has been received with enthusiasm. See her perform “Tico Tico” from the album here. However, her latest project “Prokofiev” features live recordings with no retakes for an electrifying second movement.

Speaking with Michael Cookson in a 2013 interview, Mullova shared her personal opinions about Baroque music and specifically the adjustment from a modern set up to gut stings on her 1723 Stradivarius saying, “In the beginning it was very difficult because it’s a different technique.”

Viktoria Mullova’s talent and resolve to overcome incredible odds has made her international fame and success possible, but it is her determination to continue exploring different styles and aspects of music that makes her one of today’s modern music masters. Learn more about this exceptional artist, view her discography, and see her upcoming concert and tour dates by visiting her website.