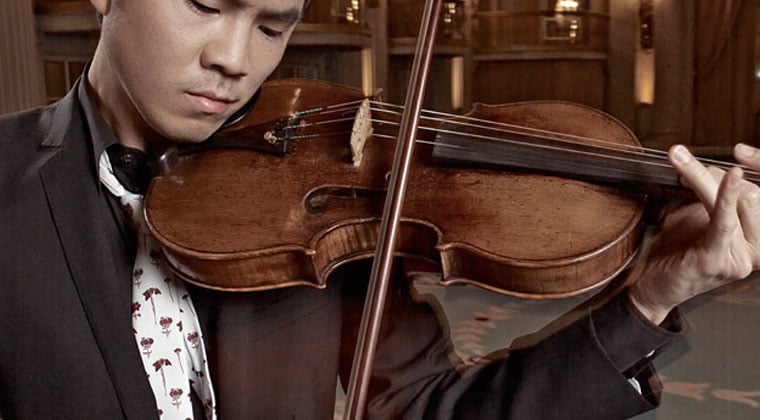 It's not often a violist gets a city-wide proclamation. Don't tell that to violist Richard O'Neill. O'Neill has been making a name for himself since he became the first (and only) violist to earn an Artist Diploma from The Juilliard School.

Born on December 31, 1978 in Sequim, Washington, Richard Yongjae O'Neill is popular the world over. The London Times described his performance as "ravishing." The New York Times described one of his performances as "a crackling, visceral, reading that held the audience in rapt attention."  He's even been the subject of a five-hour documentary produced and broadcast by the Korean Broadcasting System, where it was seen by over 12 million people.

O'Neill's first instrument was the violin. As he outgrew the small instrument, a teacher suggested he play the viola. In an interview published in The Korea Times, O'Neill tells how he was told to listen to an album of works composed by William Walton when he was just 13 years old. He describes this first experience listening to Walton's work, "… at first I thought it was weird. It's dark with dissonant chords...but I listened again and again and I became hooked on this piece. It has an amazing story. It begins and ends in the same place and it's not a particularly happy ending."

O'Neill attributes much of artistic inspiration from his early life in small town in the Northwest.

At 15-years-old, he enrolled in the North Carolina High School of Visual and Performing Arts. He earned his undergraduate degrees at the University of Southern California Thornton School of Music, before moving on to Julliard.

The violist has performed at numerous prestigious venues and with prestigious companies, including

O'Neill has also won an Emmy Award and been nominated twice for Grammy Awards, including a nomination for Best Soloist with Orchestra for his recording with the Fred Sherry String Quartet of Schoenberg's String Quartet Concerto.

As a recording artist, he's had albums that have gone Gold, Platinum, and Double Platinum. O'Neill is also the founder and artistic director of the Ditto Festival, an annual classical chamber music festival in Seoul, South Korea. He begun the festival to introduce chamber music to a broader audience in South Korea and Japan.

Contemporary Composers and Beyond

In addition to exposing more people to chamber music, O'Neill is committed to bringing lesser known and contemporary composers before all audiences, new and experienced alike. He's performed and premiered many new pieces, such as Mason Bates, "Liquid Interface."  His eighth and most recent album, "British Viola," is entirely works composed by British composers, including William Walton - his first musical influence.

O'Neill has taught music and viola all over the United States from UCLA in California to Brown University in Rhode Island. He's also involved with many charities like OXFAM and the Special Olympics, and is a Goodwill Ambassador for the Korean Red Cross. He also runs marathons for charity.

He performs on a rare Giovanni Tononi viola, crafted in 1699. O'Neill expresses his love for the viola and what drives his career this way:

"The viola is a beautiful instrument of immense colors and emotional power and has been overlooked as a solo vehicle for many years. It's a beautiful thing to be part of a young generation of soloists fighting to make the viola a prominent solo instrument."