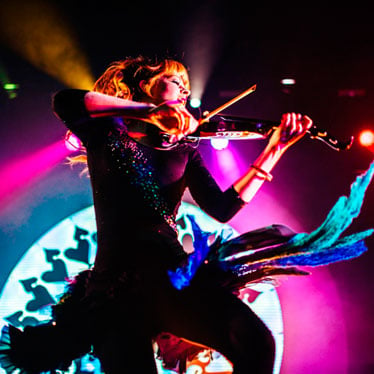 One of the most wonderful aspects of learning to perform with a musical instrument is its ability to offer the musician complete freedom of expression. This next artist’s phenomenal success during recent years is a great example of that fact. Lindsey Stirling’s rapid rise in global popularity has stemmed from her unique performance approach and refusal to alter her inner passion or give up on following her dreams.

After being voted off the “America’s Got Talent” quarterfinals in 2010, instead of believing that the world didn’t have any place for a dancing dubstep violinist and giving up, the experience made her more determined than ever to remain true to herself. This dancer, violinist, composer, and singer directed her own path to success; and by doing so she has achieved incredible strides in an amazingly short time.

Born in Santa Anna, CA, September 21, 1986, Stirling starting learning music at the age of five. Costs were a hindrance, but her parents were firm in their support of her early training. Later when given the choice between dance and violin classes, she chose to stick with the violin (newmediarockstars.com, 2013), therefore, her dance moves are primarily self-taught, an unhindered form of her personal expression.

She continued to pursue classical music studies as a teen growing up in Arizona, but while attending Mesquite High School joined with peers to create a rock band called Stomp on Melvin. It was during this time that she composed an original rock-violin solo, which she played in the America’s Junior Miss Finals competition (Arizona Republic).

She was 23 when her appearance on America’s Got Talent led her to collaborate with Devin Graham on a music video of “Spontaneous Me” for her YouTube channel. However, this was only the beginning of her rise to stardom. During 2011, her channel, lindseystomp, quickly rose in popularity; indeed, as of April, 2016, it has close to eight million subscribers and over a billion views. Stirling’s eclectic style that merges Celtic, pop, rock, and classical music resonates with her fans, and her enchanting performances are truly unique.

Her self-titled debut album was released in late 2012, coinciding with her first American Tour which ended in late November that same year. However, in December, Stirling’s video “Crystallize” earned the number eight spot for topped viewed videos, YouTube announcing that it garnered over 42 million that year; and she immediately embarked on a second tour, playing in 55 cities throughout Europe and North America in early 2013.

In addition to collaborating with some of the music industry’s most well-known artists, Stirling also spends her time encouraging her fans and especially young artists. She makes no secret of her personal struggles, mentioning on her website biography that she depended on the violin as a “comfort throughout her struggle with an eating disorder during early adulthood.”

She further states that “The same reasons I was told I wouldn’t succeed are the reasons people travel hundreds of miles to see me now.” By using examples from her own life, she encourages teens to remain confident “In the very thing that makes [them] unique—then wait for the world to catch up.”

And, for Lindsey Stirling, it definitely caught up. Just a few of her recent accolades include:

Recently, Stirling announced that she had been writing her autobiography, The Only Pirate at the Party. The book, published by Gallery Books and co-authored by her sister, achieved a place on the New York Times best seller list in January this year.

This vividly unique artist has achieved her fame and recognition because rather than accept what other people told her couldn’t be done, she remained true to herself, composing and developing musical performances and pieces that satisfied her personal artistic ambition. By carving her own path, Stirling has proven that you don’t have to do what’s expected to orchestrate your own success.