Published by StringOvation Team on June 20, 2019 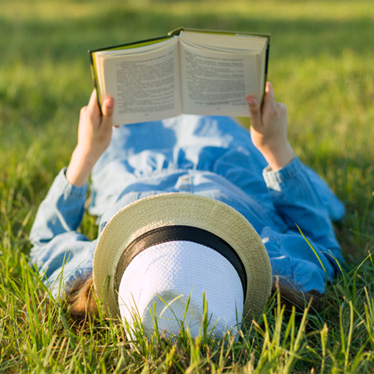 Among life’s simple pleasures, summer reading is right up there. Just the thought of relaxing in the sand, on the porch, or under a nice shading tree with some good titles is enough to make you wish for an endless summer. Here’s an eclectic list of six books for string students to enjoy. And if you are reading outside, don’t forget the sunscreen!

Children Of The Stone: The Power Of Music In A Hard Land
By Sandy Tolan

The world’s first glimpse of Ramzi Husseub Aburedwan showed him in a widely circulated photo as a frightened – though defiant – 8-year-old throwing a rock at an Israeli tank. No one could have known at the time that Aburedwan, who grew up in a refugee camp, would go from poster child of Palestinian resistance to respected violist preaching the transformative power of music.

Sandy Tolan is an award-winning journalist known for his work in print and on radio. His book is a product of meticulous reporting. While it provides historical context, it stays true to the story of Aburedwan, who went on to open a music school that attracted the support of prominent musicians from around the world, including an eminent Israeli conductor.  GET IT HERE.

At the same time rock and roll was waking up and inspiring millions of young people on both sides of the Atlantic, Bernstein was the undisputed king of the classical music world. He had the distinction of being the first American, domestically-trained, to reach such heights. It’s not just his talent as a musician, composer, and conductor that propelled Bernstein to stardom, but also his role as an ambassador for classical music.

From the moment Bernstein stepped in to conduct the New York Philharmonic, to the creation of the Young People’s Concerts, Shawn’s book chronicles this legend’s rise to fame and enduring legacy. This comprehensive biography discusses Bernstein’s influences and takes a deep dive into some of his compositions. GET IT HERE.

Practicing Sucks, But It Doesn’t Have To!
By Phyllis Sdouia-Satz and Barry Satz

Not everyone groans and grimaces or rolls his or her eyes at the thought of practicing their string instrument. In fact, it’s something many, though not all, music students look forward to. However, if you identify more with that smaller group that doesn’t relish the idea of going over the same chords and scales for a solid hour or two, this book is for you.

Applying humor to a serious subject, the authors offer hundreds of ideas to help classical music students in the beginning and intermediate stage navigate what for some can be the biggest hurdle to success. Advanced musicians can learn some helpful hints, too. Readers who have reviewed this book call it “excellent” and “life-changing.”  GET IT HERE.

It’s 1827 and as the beloved composer is near death, a young musician, Ferdinand Hiller, comes to pay his respects. Hiller, following custom, snips a lock of Beethoven’s hair before the master is buried. More than a century later, that lock of hair would be sold at auction and become the key to finding answers about Beethoven’s poor health, particularly his hearing loss. Can modern technology unlock those mysteries? There’s also the question of how that lock of hair, a cherished Hiller family heirloom, ended up in Denmark.

A true story, this book has the magnetic pull of a thriller while answering some of those lingering  questions about one of the world’s most celebrated composers. GET IT HERE.

There should be no surprise that a conductor of Kent Nagano’s stature would have deeply held beliefs about classical music beyond its appeal as an art form. The intensity of those beliefs – in this case ideology might be the more accurate term – is another story. And, well worth your time. The seeds of Nagano’s passion for classical music were planted while he was growing up in a farming town on the California coast. As a witness to the profound impact an itinerant music teacher had on the community, Nagano developed a missionary zeal.

In this book, which serves the dual purpose of memoir and manifesto, Nagano isn’t shy about his views, which include the lack of funding for the arts. As the 21st century seems increasingly defined by upheaval and climate-driven disasters, Nagano sees an opportunity: “Let’s transform ‘the crisis of classical music’ into ‘classical music for a time of crisis,’ he writes in the book. GET IT HERE.

Mozart In The Jungle: Sex, Drugs And Classical Music
By Blair Tindall

Before the acclaimed comedy series on Prime, there was Tindall’s best-selling 2005 memoir that inspired it. She tells all about life as a rank-and-file professional classical musician trying to make a living in New York. For many of the city’s classical musicians, even Grammy nominees like Tindall, it’s not all concerts in David Geffen Hall or Broadway orchestras. Far from it.

Don’t get the wrong impression: Tindall loves classical music and loved playing it. It’s the business and political aspects of that world at which she takes aim. And if – as some critics suggest – Tindall took creative license in sharing some of her grittier memories, it’s a compelling story and a rare look behind the scenes of an often insular world. GET IT HERE.