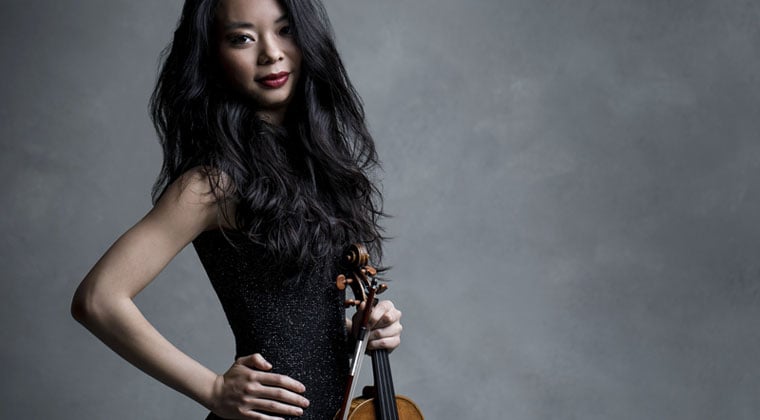 Sirena Huang is a rather young professional violinist. Even so, the New Jersey-born, Connecticut-raised musician has already racked up quite the impressive list of competition wins and solo performances. In 2011, while just 17 years old, Huang was appointed as the Hartford Symphony Orchestra’s first Artist-in-Residence. If you’re not yet familiar with this soon-to-be star described by the Baltimore Sun as having “impeccable technique…deeply expressive phrasing…and poetic weight," now’s your chance.

Years of study, that still continue

Huang’s family moved to Connecticut when she was four years old. At the time, her older sister began taking piano lessons. Huang would accompany her, but their mother noticed how bored Huang was just watching. The first thought was to have Huang take her own piano lessons. The piano thing didn’t work out because her hands were too small. They thought the violin would suit her better. Huang remembers that her first violin was a 1/16 size, which she describes as “basically a toy.”

At four years old, Huang studied at the Hartt School. She then joined the Juilliard School Pre-college division, where she studied for nine years. She then attended Juilliard College and studied with Itzhak Perlman and Sylvia Rosenberg. Huang isn’t done yet with her schooling – she’s gone on to Yale to begin her masters, where she studies under Professor Hyo Kang.

In 2004, the nine-year old Huang made her solo debut with the National Taiwan Symphony Orchestra. Since then, she’s been a frequent flyer on the competition circuit, where she's done quite well:

Huang was also the First Prize winner at the inaugural Elmar Oliveira International Violin Competition, held in Boca Raton, Florida in 2017 (The competition will start accepting submissions for the 2020 competition in early 2019, so start preparing now!). Here is Huang’s winning performance:

Her competition career hasn’t interfered with her solo career. She’s performed all over the world. A partial list includes:

The Sejong Soloists Foundation has recently lent Huang a Peter Guarneri violin she currently uses to perform. In the past, she performed on a del Gesù loaned to her by the Julliard Collection.

While her musical performance debut happened when she was just nine years old, her speaking career had to wait until she was eleven. In 2006 she gave a TED talk that was part performance and part discussion of the design and technology of the violin. Huang’s TED talk has earned more than 2.5 million views. You can watch it here:

Huang has ruminated about the unexpected success of her talk, and how it was an important early lesson for her on connecting classical music to a modern world:

“It was a first exercise for me, to be able to relate classical music to media now, technology now, everything that is changing. That's what got me started thinking about that whole idea: How do I relate music with technology? Because we're surrounded by so much media at a young age, we have to always see how we relate to the growing media.”

It’s not surprising such a young artist, as digital native, would tackle head on the issues of where classical music and technology might meet. It makes looking to her future exciting. Take a listen to her TED talk, What do you think? Does she make some good points? What would you add? Join our discussion below.