Published by StringOvation Team on October 10, 2018 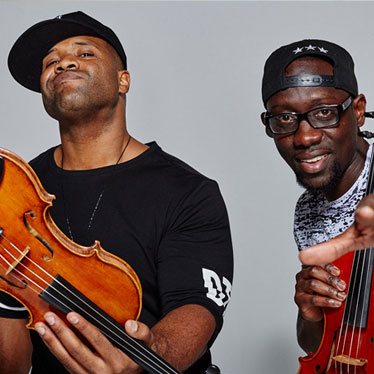 Previously, we posted an Artist Spotlight featuring Damien Escobar – a non-traditional violinist with classical music training that serves as a foundation for his hip-hop inspired music. Today, we're featuring Black Violin – a dynamic duo who also use their exceptional musicianship to produce a mashup of both classical and hip-hop genres. The group consists of viola player Wilner Baptiste (Wil B.) and violinist Kevin Sylvester (Kev Marcus).

To get a better idea of what they do, check out Black Violin playing Virtuoso on the Queen Latifah Show.

As a result of their customized blend of hip-hop gone violin, their music is creating a renaissance of sorts. It allows young, hip-hop loving youth, teens and young-adults to experience instruments they associate with "old" or "boring" music in a new light. As one young YouTube subscriber commented, "When I went on a field trip to see you guys I though it would be boring, but I was wrong. I’m so happy that I found your YouTube channel."

"We Studied Classical, But We Live Hip Hop"

Are you in a high school orchestra class? If so, you could be headed towards an incredible music career because that's exactly how Black Violin's path to stardom began. At that point, the large majority of their musical training was classical, although as Wil B. says in an Art Hive Magazine interview,"...sometimes we would experiment a little."

After high school, they attended separate colleges but their college music experience wasn't all they hoped it would be, so Wil B. returned to their hometown of Tallahassee and began playing with Kev Marcus again. As Kev was quoted, "We were hip-hop before classical, so for us it was very natural to combine these two worlds in a very organic way. Hip-hop is about expressing yourself, so we took this instrument that we were familiar with and we decided to express ourselves..."

This is an important point for all budding musicians to remember, even those who are classical purists ­– regardless of what genre you perform, finding your unique expression within that modality is integral to creating a persona that can grow into a more professional role.

With their roots in classical music, Bach was a given. For Kev Marcus, it was the beginning of their love for classical composers. He says,"...Bach is the equalizer, you know...the hardest thing you can play because he exposes everything about you. He exposes your weaknesses and makes you work harder. I always think of Bach as, like, the closest composer to divinity."

Little did Bach know that his music would inspire future hip hop artists – and that the inspiration spring flows both directions. As Black Violin reminds us, it's not just hip-hop lovers who get turned on to classical. Many classical music audiences are surprised to find they enjoy hip hop. Ultimately, they help to bring people – and musical cultures – together.

We hinted above how many young people consider classical music as something outdated or boring, a misguided stereotype if ever there was one. In the case of Black Violin, racial stereotypes also rise up on a regular basis. To this cause, the duo have released an album titled, Stereotypes, and Kev Marcus recounted an experience in his interview with NPR that is exemplary of something he and Wil B. are up against on a regular basis: the disbelief that black men play classical music.

Kev Marcus (who describes himself as a 6-foot-2-inch, 260-pound black man) was in an elevator, carrying his violin and began chatting with the woman standing beside him. When she learned he played the violin she said, "Well, obviously you don't play classical, so what kind of style do you play?" This type of racial stereotype is something Black Violin hopes to dissipate as their career moves forward and their audience broadens.

Versatility takes you anywhere (with anyone)

Perhaps one of the most exciting benefits of what they do is the ability to perform with musical greats across the spectrum. In addition to the Yo-Yo Ma and classic pop icon Elton John, Black Violin has shared the stage with The Wu Tang Clan, Kanye West and Alicia Keyes, demonstrating how musical versatility and flexibility open doors that rigid boundaries rarely can.

In the future, Wil B. hopes Black Violin has the opportunity to collaborate with artists such as Stevie Wonder, Kendrick Lamar, Curtis Mayfield, Marvin Gaye, Al Green, and Coldplay "to name a few."

Would you like to get in on some of the classically-infused Hip Hop magic Black Violin is known for? With a busy touring schedule like theirs, odds are they're coming to a city near you. Let them serve as an inspirational example as you learn to find your personalized expression within the classical music world.

Above image of Black Violin courtesy of blackviolin.net