Published by StringOvation Team on July 28, 2017 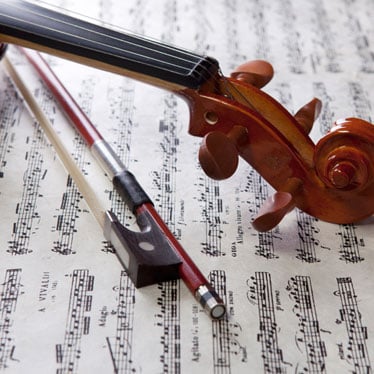 Vivaldi, one of the Baroque era’s greatest composers, loved the violin. He wrote over 500 concertos, nearly half of them with solo pieces for violinists. So picking his top five greatest hits for violin was always going to be a difficult task. Inevitably, some people will be upset by a work that did or did not make the list.  However, there’s one point everyone can agree on: what’s in the top spot.

The Four Seasons are really the first four concertos of a collection of twelve concertos written by Vivaldi called Il cimento dell'armonia e dell'inventione (The Contest Between Harmony and Invention). The works were written sometime between1720 - 1723 and first published in 1725. Contemporary composer Max Richter described its movements as “quite concise, but on a micro level it is modular music, made of these little atoms. You can pull them apart easily, sort of like a Lego kit.”

They are often considered the first example of “program music,” as Vivaldi published them with companion poems sharing the natural aspects of the seasons he meant to evoke with his music. The works themselves were inspired by a series of four paintings depicting the seasons by Marco Ricci. Thus you could say that the Four Seasons are an 18th century multi-media project.

This collection of violin concertos is one of the world’s most popular and often used in popular culture from The Simpsons to the horror film Halloween II, and countless other television shows and movies from every genre.

Not as famous as its four cousins noted above, La tempesta di mare is actually the fifth concerto from the same series. It’s one of Vivalid’s shorter concertos, but he packed quite a punch in there. The entire piece is high energy, filled with fresh, colorful passages. Its first movement is set with a presto tempo, with the second movement providing a bit of breather with its largo tempo. The piece ramps up again in a presto third movement, providing an exuberant ending. This one will be a workout.

To confuse matters a bit, Vivaldi gave the subtitle “La tempesta di mare” to three other concertos he composed for the flute: Chamber Concerto in F major (RV 98), the Concerto for Flute in F major, Op. 10/1 (RV 433), and Chamber Concerto in F major (RV 570). Fortunately, Danish musicologist Peter Ryom created the definitive catalogue of Vivaldi’s works in the early 20th century, along with the RV (Ryom Verzeichnis) numbering system that makes it easy to distinguish each Vivaldi work. The Four Seasons concertos each have an RV number as well, but don’t really need them.

We’re cheating a bit here, because Vivaldi composed around 30 concertos for this most favorite student of his, violinist Anna Maria. To the concertos first: While he composed several concertos for her, a collection of six of them are considered to be the best of the bunch. You can hear one of them, concerto E flat major (RV 260), performed by Shlomo Mintz here. Mintz recorded all six of them with the Israel Chamber Orchestra.

Anna Maria was no ordinary muse. Vivaldi composed these concertos to be performed by her, as she was considered a virtuoso violinist in her life time. She is included in J. G. Walther’s Musicalisches Lexicon (1732). Vivaldi was the musical director at the Ospedale della Pietà in Venice, an orphanage for girls, that had its own orchestra. As an orphan, Anna Maria had no last name, but came to be known in Italy as Anna Maria dal Violin.

This concerto is part of a larger opus called “La stravaganza” (The Extravagance), which could describe the quintessential Vivaldi sound. Yet in fact, the 12 works in this opus are known for being a bit of a departure for the composer as each of these concertos has long periods of slower tempos. This concerto takes a slightly more moderate tempo, moving from allegro to largo and back to allegro. although there’s still plenty of opportunity to show some speed skills. The concertos in La stravaganza were written around 1712-1713 and published in 1716.

These concertos also provide layers of complexity by often having parts for additional soloists, in addition to the first violin.

As part of his work as the musical director at the orphanage, Vivaldi made it a point to compose works for young students to develop and refine their technical skills. This concerto, along with the others in Vivaldi’s L'estro Armonico (Harmonic Inspiration), the 12-concerto opus where this piece was published, is a great example of such a work. L'estro Armonico was Vivaldi’s first collection of concertos to published, coming out in 1711.

Of course, with 230+ violin concertos to choose from, it’s hard to go wrong with Vivaldi.