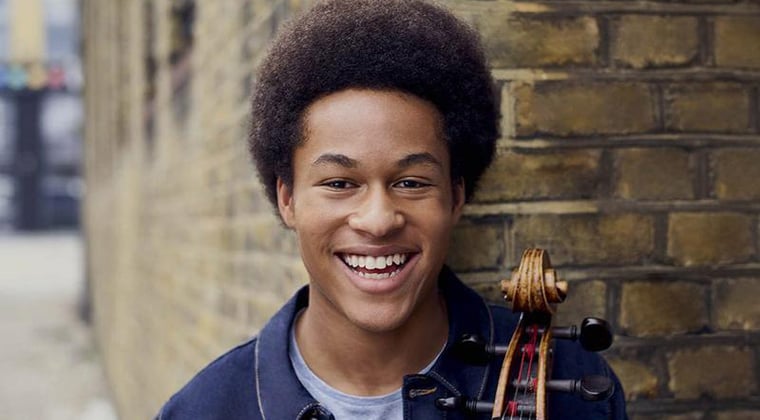 In the universe of shining, young musical stars, Sheku Kanneh-Mason could be called his own solar system.

Consider that in the past several years alone, this gifted cellist starred on British reality TV, made hit recordings, earned a top BBC honor, performed at both the Royal Albert Hall and Carnegie Hall, soloed for Prince Harry and Meghan Markle at their royal wedding, and was the subject of a documentary.

All before the age of 21. While managing type 1 diabetes.

And he continues to learn and grow: Kanneh-Mason is a full-time student at the Royal Academy of Music, studying under Hannah Roberts. Some of his siblings have either been students at the Academy, or are currently studying there as well.

It’s also worth mentioning his cover of Bob Marley’s “No Woman, No Cry” went viral on YouTube and other platforms, with more than 2 million streams just on Spotify, according to the family’s website.

Now a Young Artist in Residence at the Royal Liverpool Philharmonic with a worldwide touring schedule, Kanneh-Mason, outside music circles, may not be as recognizable as the A-list celebrities present for that royal wedding gig, but just give him time. Born into a musical family – the third of six siblings – he already is making a name for himself as an ambassador for classical music. And, as a philanthropist, helping young, aspiring cellists (more on that to come).

Born in 1999 in Nottingham, England, both of Kanneh-Mason’s parents, Stuart Mason, the business manager for a luxury hotel chain, and Dr. Kadiatu Kanneh, an academic, had both played instruments when they were younger, though neither pursued music as a career. However, when they decided their oldest child, daughter Isata, would start piano lessons, they didn’t know she was a prodigy-in-waiting who would go on to inspire her equally talented younger siblings.

Briefly a violin student, Kanneh-Mason switched to cello at age 6 because there already was a violinist in this family – his older brother, Braimah.

“I actually started on the violin for about a month, but my elder brother Braimah was also playing the violin,” he said in an interview with The Guardian. “I wanted to outdo him and play a bigger instrument so I switched to the cello when I was six and-a-half years old.”

Even before he started learning the cello, he was intrigued by the sound, particularly as it was articulated by Jacqueline du Pré, Kanneh-Mason said in another interview last year, with Presto Classical.

“I started listening to Jacqueline du Pré when I was four or five – her recording of the Elgar Concerto was one of the things that really inspired me to play the cello,” he said.

When Kanneh-Mason was nine, he was awarded an ABRSM (Associated Board of the Royal Schools of Music) scholarship to join the Junior Academy of the Royal Academy of Music, where he was tutored by the London-based cellist Ben Davies. He went on to attend the Trinity School in Nottingham, where he earned A levels (similar to Advanced Placement studies in the U.S.) in music, math, and physics.

In 2017, Kanneh-Mason came to his ala mata’s rescue when, due to budget cuts, Trinity was about to cancel its cello program. His £3,000 donation ensured the school would keep the program intact for at least three years.

“Being a cellist myself, the department of music is something that is close to my heart and I couldn’t see it go, especially when I knew I could do something about it. I didn’t really have to think about it, I knew it was the right thing to do,” he told the Nottingham Post.

Fame with the family

They didn’t win, but it put the family in a spotlight that has only shined brighter since.  Watch the Kanneh-Masons’ audition for “Britain’s Got Talent.

Kanneh-Mason, along with Braimah and Isata, are members of the Chineke! Orchestra founded by Chi-Chi Nwanoku for black and minority ethnic classical musicians. The Orchestra will be performing at the Kennedy Center in 2020.

In 2016, at age 17, Sheku won the BBC Young Musician of The Year award. He and three other finalists performed in front of a live audience before the winner was selected.

"I'm so grateful for all the support from my family, the Junior Royal Academy of Music, my teacher Ben Davies and Chineke! that have helped me on this extraordinary journey,” Kanneh-Mason told the BBC.

At the beginning of 2018, about four months before Kanneh-Mason Sheku performed at the royal wedding, his debut album, “Inspiration,” was released by Decca Classics. It features the Shostakovich Cello Concerto No. 1, the Bob Marley cover, and Leonard Cohen’s “Hallelujah.” It entered the UK charts at No. 18. On the U.S. Billboard charts, his album went all the way up to No. 60.

Even with a packed touring schedule and the dedication to his studies, Kanneh-Mason has his ears open for new opportunities to expand his repertoire.

“I enjoy discovering lots of music and learning,” he told The Guardian. “I think it’s something that will never stop, that’s one of the exciting things about classical music.”

In the meantime, he’s wowing audiences across Europe and around North America. Check out his touring schedule here.

Top image of Sheku by Lars Borges courtesy of shekukannehmason.com