Published by StringOvation Team on April 24, 2018 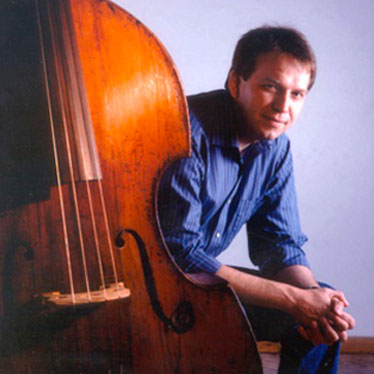 Rinat Ibragimov is a celebrated double bass player, whose career took him from his native Russia, to London - where he served as the London Symphony's principal bass player for many years.

His journey from cello to bass, his knack for finding just the right teacher, and his bold move into the London Symphony Orchestra (which he described as a pleasant form of culture shock) are all exemplary of the fact that the only predictability in the life of a dedicated music student is hard work and lots of practice.

Rinat on the early years

Ibragimov is known for the very sweet and passionate sounds he elicits from the bass - and he attributes the "sweetness" he is able to draw out of the instrument to the fact that he started out playing the cello.

Often, we assume that professional musicians of his caliber begin playing the same instrument they're known for, but this isn't always the case. While some virtuosos continue playing their first instrument, others have a more meandering pathway (like violist Kim Kashkashian, who started out on violin). Rinat Ibragimov played the cello for an entire decade before switching to the double bass.

In an interview with the UK's Time & Leisure, Ibragimov says there were a few factors that contributed to him making the switch, "...my teacher was bad, my technique was poor, and the competition [to stand out on cello was] too much. They suggested I change to bass - and then I had a great teacher!"

This switch was a wise move and one that ultimately launched his career, for without the same, heightened-level of competition, the addition of a teacher he respected and who worked well with him, and his former cello experience - Ibragimov was able to create his own, unique sound on the bass.

On finding the right teacher

His story is also one that speaks to how important it is to have the right teacher. When Ibragimov made the move from cello to bass, he also changed instructors. In the beginning, he worked with Gregory Favorsky at the Ippolitov-Ivanov College. His success there took him to the Moscow Tchaikovsky Conservatoire, where Ibragimov studied under the legendary Evgeny Kolosov, who became one of his greatest influences.

Ibragimov remarks that one of the most unique things about Kolosov, particularly for his teaching generation and being a Russian-born and trained musician, is that Kolosov was truly on the side of the student. In a tribute to Kolosov, Ibragimov commented on how different Koslov's teaching approach was, "...you felt that Kolosov was on your side...very different to lessons where it feels that teachers are waiting for mistakes so they can then correct them through their supposed superiority."

This support allowed Kolosov's students to develop their own styles, techniques and approaches, and while Kolosov didn't always approve of their choices, his teaching style gave students the courage to go against his suggestions. This freedom to follow one's instincts worked well for Ibragimov, who went against Kolosov's advice and ultimately won first-place in the 1984 All Soviet Union Double Bass Competition - and still retained the approval and support of his humble teacher.

On partnering with instruments (and bows!)

Every well-known strings player has a strong affinity with his/her instrument. This is also the case for Ibragimov, who plays a 300-year old Albani. The instrument originally belonged to his stand partner when they played for the Bolshoi Theatre Orchestra (1983 - 1997).

Ibragimov loved the sound the Albani made and his stand partner was generous, frequently allowing Ibragimov to use it for solo concerts and competitions, including an important first-place win at the Giovanni Bottesini International Competition in Parma, Italy back in 1989. The total prize awards were large, and Ibragmov offered to trade the entire prize winnings for the instrument.

Instead, his stand partner gave him the instrument saying, "...that would be like selling my mother - I couldn’t do it - so I’ll give it to you instead." Ibragimov has also commented on how important it is to have the right bow, "The perfect bass bow doesn’t exist - we need a heavy stick in the orchestra, but a lighter one for solo work. My own favorite is a unique experimental French bow, about a hundred years old, much more like a cello bow."

Ibragimov and his beloved Albani (along with Ibragimov's family, including his famous violinist daughter, Alina Imbragamova) moved to London, where he served as the principal double bassist for nearly 15-years, in addition to teaching d-bass at the Guildhall School of Music and Drama.

In 2014, Rinat Ibragimov suffered a severe stroke, leaving him unable to perform, although he still teaches on a part-time basis. However, Ibragimov's legacy - as this video performance of Giovanni Bottesini's Concerto for Double Bass No. 2 in B Minor illustrates - will live on forever.