Best Violin Solos or Interludes Ever Recorded in Hip-Hop Music

Published by StringOvation Team on October 11, 2021 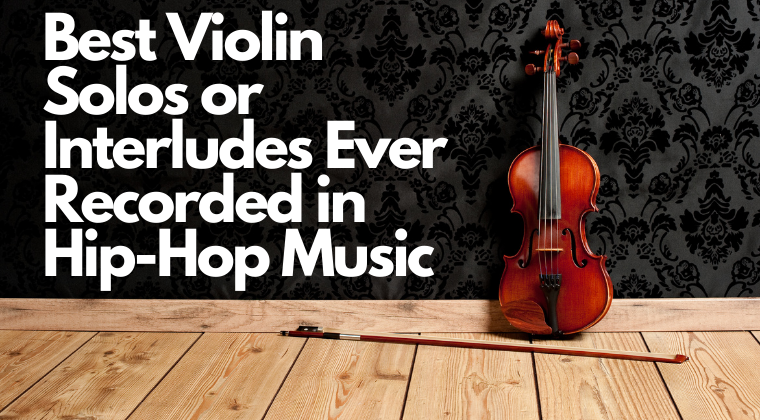 Most string musicians get their start in the classical realm, which is a good foundation for teaching proper playing techniques and learning the basics of rhythm and sight-reading. That said, we highly encourage all string players to branch out and play their instruments across the music genre spectrum to increase your versatility as a musician.

While genres like bluegrass and rock music are known for featuring string music, hip-hop artists also incorporate string instruments into their songs. If you're interested in branching out into other genres, read our post Get Out of Your Comfort Zone - Play More Than Classical on Your Violin for tips.

Here are some of the most famous string solos and interludes ever recorded in hip-hop music. If you love the hip-hop and rap genres, we hope these examples inspire you to create your beats and melodies without shying away from classical or string-inspired echos. You never know. You and your fellow players may become the next Black Violin.

The hit film, Dangerous Minds starred Michelle Pfeiffer and featured the song Gangsta's Paradise by Coolio. The song hit number 85 on Billboard's Greatest Songs of All-Time and was the number one biggest-selling single of 1995 on U.S. Billboard.

Its award-winning rap artist got his inspiration from Stevie Wonder's 1976 recording, Pasttime Paradise, so Coolio opted to insert violin riffs. He liked the idea of a classical foundation in honor of a classic song. It is also one of the first rap/hip-hop songs to feature violins, and it inspired a trend. Watch the video and take a listen.

Puff Daddy: Come With Me

Puff Daddy (now P.Diddy) recorded Come With Me, featured on the soundtrack of Godzilla, released in 1998. The powerful string interludes include a direct sample from Led Zeppelin's world-famous song, Kashmir, along with some original string melodies and riffs. (Not surprisingly, we had already listed Kashmir as one of the Top 10 Rock 'n' Roll Songs for the Violin.)

Kanye West collaborated and produced Overnight Celebrity by Twista. If you watch the video below, you'll see violinist Miri Ben-Ari, who has continued to play for Kanye on multiple albums. Of course, Kanye's love of violins is not a secret, which brings us to our following example of a hip-hop violin interlude.

At first listen, fans might believe this song is all about the piano. However, the violin samples throughout the song round out the rhythmic foundation. Kanye West debuted Runaway at the 2010 MTV Video Awards. He acknowledged tangible tensions between the music, the lyrics, and the beats, which is an intentional commentary on how he feels about and views his relationship with society.

We recommend watching the video to see Kanye on the piano and surrounded by the incredible chorus of ballerinas.

Rap lovers love 1Train because it is a collaboration by some of the most notorious artists in the genre, all from different backgrounds. Contributing artists include Kendrick Lamar, Joey Bada$$, YelaWolf, Danny Brown, Action Bronson & Big K.R.I.T. It also features a repetitive string sample that's compelling and can be adapted to any combination of strings.

You can learn more about featured artist Kendrick Lamar in a recent biography included in our 2021 Top Summer Reads for Music Educators.

The eerie intro to Dr. Octagon's Blue Flowers begins with an excerpt from Hungarian composer Béla Bartók's Violin Concerto No. 2. The excerpt loops throughout this somewhat eccentric song by Dr. Octagon, a persona adopted by hip-hop artist Keith Thornton, a.k.a. Kool Keith, a '90s hip-hop artist and New York native known for his surreal, abstract, and often profane or incomprehensible lyrics.

If you're still on the fence about integrating hip-hop and strings, watch Sir Mix-a-Lot performing Baby Got Back with the Seattle Symphony. Now there's a concert worth remembering!

What might you be able to produce with a bit of hip-hop inspiration and your favorite string instrument? The Connolly Music and StringOvation team can't wait to hear it.