Best Violin Solos Or Interludes In Rock Songs Ever Recorded

Published by StringOvation Team on April 28, 2017 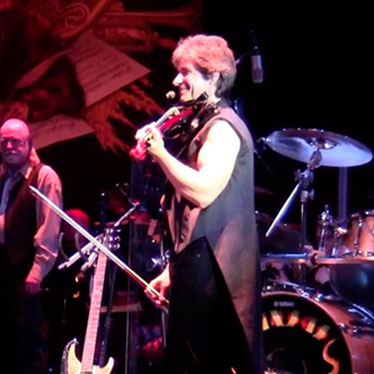 Finding inspiration for your music can come in all shapes and sizes. Students are often energized by the sounds of nature or their personal feelings, but more frequently, a jolt of enthusiasm can come from hearing what other artists have done and then trying to reproduce it. In fact, one of the best ways to stay motivated while learning to play your violin is to watch and learn from other musicians and genres.

Since most of the learning curriculum for the violin includes large doses of classical compositions, exploring different styles and techniques can fuel your determination to master your instrument. So this summer, while you’re off from school, why not listen to some of the coolest rock violin solos, riffs, and interludes that have ever been recorded? Take a break from your usual routine and discover artists who have pioneered and defined the use of rock violin.

The following songs offer an overview of some of the most famous rock songs that feature this classical instrument. That way you can examine what artists have done in the past and what they’re doing today with rock violin.

Kansas became popular in the early 1970’s and is still touring today. Although David Ragsdale (pictured above) currently plays violin and guitar for the popular group, it was violinist (and vocalist) Robby Steinhardt playing with them from 1973–1982 and 1997–2006 in these recordings that have stood the test of time. Check out these violin masterpieces:

Pink Floyd is another iconic rock band that incorporated violin. With the “grandfather of jazz violinist” Stephane Grappelli (1908-1997) playing violin (begins at the 3:05 minute mark) in this recording, this has got to be, truly one of the best versions of “Wish You Were Here” ever created. Grappelli’s melodic solo is supreme.

“Paper in Fire” by John Mellencamp is another rock/pop song that has an excellent sounding violin riff. With Lisa Germano playing fiddle, her upbeat sawing adds a grittiness to this tune that Rolling Stone calls one of Mellencamp’s “most country” songs.

Frank Zappra, “Gumbo Variations” with “Sugarcane” Harris on violin solo. This electric violin solo rocks! In fact, just about anything from Zappra with Harris does.

“Baba O'Riley” by The Who definitively includes one of the most famous rock violin solos ever recorded. The part, which was intended to be played by harmonica was performed by Dave Arbus (of the group East of Eden), who is considered as the first artist to create a Celtic rock song. Since the title never appears in the song, it’s also known as ‘Teenage Wasteland.’

“Sea of Joy” by Blind Faith. This band was one of the first “super-groups” to emerge in the genre because its members, Eric Clapton, Ginger Baker, Steve Winwood, and Ric Grech were already successful solo artists or members of another group. Mostly known as a bassist, Grech plays an outstanding violin solo on this recording.

“Sunday Bloody Sunday” by U2, with violinist Steve Wickham. This live rendition of the 1983 recording from the album War features electric violin that embellishes Bono’s vocals making it an essential part of creating the mood of the piece.

“Milk Train” by Jefferson Airplane featuring Papa John Creach on violin. Papa John Creach was an influential blues and rock violinist who performed with a number of bands and was one of the writers of this song. You can hear the rockin’ violin lick immediately and throughout this tune.

“Ocean Avenue” by Yellowcard. Again, pretty much any song with Sean Mackin playing violin is great for student inspiration, and there are plenty to choose from with this band.

“Do Ya” by Electric Light Orchestra (ELO). Just about any song by ELO. Violinist Michael (Mik) Kaminski has some great rock solos and riffs is this classic rock track that can be used for student inspiration.

“Hurricane” by Bob Dylan. The violin part of this protest song is impressively haunting. Violinist Scarlet Rivera is performing the part in this 1975 live broadcast.

"Kashmir" by Led Zeppelin and released in 1975 includes some awesome violin solo parts. In fact, this rendition is the remastered cut and sounds terrific. Because of its familiarity, this is a great rock song for violin students to learn.

By listening to other music styles performed on the violin, students can find new inspiration for their music education. These, and many other rock songs use the violin to enhance the artistic expression. Learning new techniques will build your abilities and performance strengths.