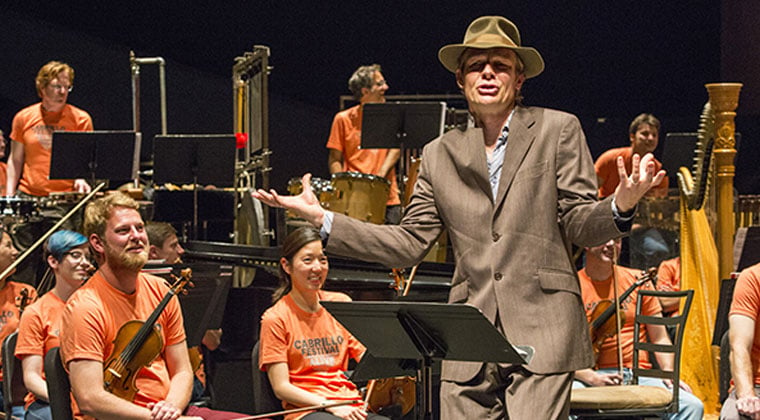 The appellation “New Music” for a contemporary musical genre can be considered either appropriately vague or graspingly proprietary. In one sense, “new music” can be defined temporally – any music that’s of recent vintage.  The Cabrillo Festival of Contemporary Music, now over 50 years old, showcases “works which are rarely more than a year or two old, and sometimes still wet on the page.”

One group that overtly takes on the label as “New Music,” Zeitgeist, also describes the genre literally as anything that is “newly created music by living composers.” Yet the group also separates much of “New Music” from other contemporary classical music, as having an intention separate from artistry and musicality, specifically “to deal with sometimes large and multi-faceted emotional, spiritual, intellectual and social issues.” Thus it’s not necessarily music that moves or captures listeners on the first hearing, but takes some context to appreciate. For Zeitgeist, embracing this sort of barrier means intentionally putting together new and unexpected instrument combinations (the ensemble is made up of a piano, two percussions and woodwinds) with discordant compositions to create performances like the works on its 2016 album “For the Birds.”

The classical music era was defined by recognizable forms and orderly internal progressions, primarily defined by the sonata framework developed by Franz Joseph Haydn.  There was structure in how a composition would progress through three defined sections of a sonata or four movements of a symphony. There was structure in grounding a work in a dominant major key and building harmonies around the tonic. There was structure in the building blocks of classical composition through the use of distinct motifs that are often connected to identifiable themes. With all this form and structure, what’s extraordinary is the diversity and creativity Classical and Romantic composers achieved while working within it and experimenting around its edges.

Indeed the Romantic composers infused a more personal and often nationalistic sensibility in their work that could be considered a precursor to Zeitgeist’s talking of “intention.” Composers began intertwining traditional, local folk music into their works such as Dvořák’s extensive use of Czech folk music. The era also emphasized program music that painted a picture or told a story, often with the help of an explanatory program, helping audiences connect immediately and directly with a new composition.

By the early 20th century, composers were leaving behind romanticism and consonance for dissonance and new approaches to tonality, such as Igor Stravinksy’s bitonal “Petrushka” or Arnold Schoenberg’s atonal “Pierrot Lunaire.”  Harmony and melody take a serious backseat if they’re present to any great degree at all. This deviation away from the tonality of classical and romantic music results in a barrier of dissonance that requires more patience from audiences to accept it as it seems to sound unnatural.  This era also saw composers, such as Maurice Ravel, incorporating jazz and other musical genres into their compositions.

Extreme experimentation of the 21st century

These early 20th century sorts of rule-breaking from classical forms are the forerunners of the avant garde and New Music that started in last half of 20th century. Composer and musical philosopher John Cage, is widely considered a pioneer of New Music. His 1952 composition 4’33” broke every rule of musical composition by containing a single note of composed music. Instead the selected performer(s) sit on stage for exactly four minutes and 33 seconds doing nothing. Cage’s intention was to use those four minutes and 33 seconds to section off an unplannable, unrepeatable composition of environmental sounds. With this work, there are no forms, not motifs, nothing to express.

Where he did put note on paper, Cage still intentionally used external devices to construct a work and removing himself – as much as possible – from the process of composing. Examples include “Root of an Unfocus,” which he wrote for a prepared piano, which is a piano that has objects placed in its strings to alter its sounds; and “Music of Changes,” which he composed through consultation with the classical Chinese book “I Ching,” a book that can produce random number sequences.

Where does this leave New Music in the 21st century?

Contemporary composition can follow on the traditional forms of classical composition while folding in contemporary musical genre motifs and instruments. Or it can throw out classical forms altogether to produce entirely new instrument and sound combinations unconstrained by traditional notions of tonal or melodic pleasantness.

Perhaps New Music of the 21st century is like the cliché from the movie musical Grease: “The rules are there are no rules.”

Is New Music a career choice for you? Look for our upcoming blog on New Music careers.

Top photo: Composer/narrator Nathaniel Stookey has fun with the Lemony Snicket libretto of The Composer is Dead during a Family Concert at the Cabrillo Festival of Contemporary Music. Photo by rr jones.