Published by StringOvation Team on July 02, 2018 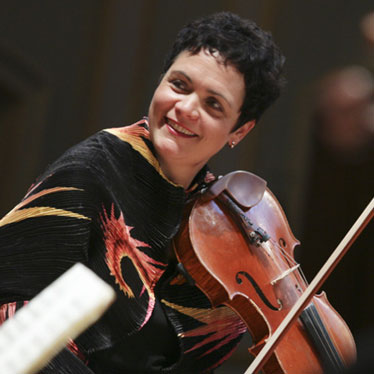 If you're a regular StringOvation reader, you already know a bit about German violist Tabea Zimmermann. In our recent post, 5 Habits of Celebrity Violists, Zimmermann shared some of her tips for getting rid of those pesky stage jitters.

Biographical facts are relevant to getting a better picture of who an artist is - within the context of their lifetime and work. However, we enjoy sharing more nuanced facts. So, we'll begin with a quick bio rundown, continuing with wisdom that will touch your heart.

Tabea Zimmermann was born in Lahr, Germany - located in Germany's famous "Black Forest" - on October 8th, 1966. She started playing viola when she was three-years-old, under the direction of Dietmar Mantel at the Lahr Music School. Her talent was evident immediately. By age 13, Tabea was studying viola at the University of Music Freiburg with Ulrich Koch and then studied for a year at Mozarteum Salzburg (1986 - 1987) with Sandor Végh. Throughout those years she won numerous competitions and awards (which have continued throughout her career), all are categorized on Tabea Zimmermann's website.

In 1987, Zimmermann became the youngest professor in Germany at the Hochschule für Musik Saar Saarbrücke, where she taught for two years. She went on to become a professor at the University of Music and Performing Arts Frankfurt/Main, and in 2002 Zimmermann joined the faculty at Academy of Music “Hanns Eisler” Berlin, where she continues to teach and instruct aspiring viola students.

Chamber and ensemble performance is as valuable as soloing

"I prefer direct contact with other musicians through my instrument. Although I now have a more comprehensive picture of a composition than I did 20 years ago, I have no wish to exert control over a performance. The best results come when each musician feels invited to take part in an interpretation, the communication taking place through the musical flow." (tabeazimmermann.de.en)

Perhaps one of the most striking things about Tabea is her humility. Her passion for playing viola and connecting with other musicians keeps her humble. For Tabea, performing with a group and creating a musical texture with other musicians is every bit as satisfying as a solo career.

While she thoroughly enjoys performing her favorite piece, Bartók’s Viola Concerto (Click Here to watch her performance with the Berliner Philharmoniker), Tabea is most filled with joy and passion when performing in communion with others - both other instrumentalist and the souls of her audience members.

"A career should never develop faster than one’s inner growth. Aspects like sound and tonal volume need their time to be developed. This isn’t just a question of the hands and musculature or of techniques. The imagination must develop as well." (tabeazimmermann.de.en)

Similarly, Zimmermann believes that while technique is valuable, all string musicians should be given the time and space to cultivate a unique style. She feels that as a musician's imagination and connection to the instrument develops, so too with their beautiful tone and ability to be expressive. Even so, Tabea doesn't believe she makes life easy for students.

In an interview with The Strad, Zimmermann discussed her views that students need to find their way around viola fingerings and techniques independently, which makes things more difficult because the learner doesn't have the easy route of "doing this or that." Zimmermann states, "Even if it would accelerate things if I gave them tried and true fingerings, in the long run, it's much better if they learn to choose for themselves from the many possible solutions to any given technical or interpretative problem. There is no one technique: we should rather strive to find the adequate tools for realizing every piece of music."

"All too often a young competition winner is taken up by an agency as the ‘new star’; the publicity machine starts rolling, and the musician has to fulfill lots of engagements. He feels like a hamster in a wheel. Who can mature as an artist under such conditions?" (tabeazimmermann.de.en)

Along those same lines, Tabea believes that early fame - often brought on by multiple, key competition wins - is dangerous for young musicians. It places a pressure on them that inhibits their ability - and drives violists in predictable directions. Ultimately, it robs talented musicians of the ability to follow their instincts and develop unique musical voices that sets them apart from the crowd later on in their careers.

What wonderful advice for young, talented musicians who so often feel overly pressured by outside forces. Tabea Zimmermann is an inspiration to violists and other string musicians dedicated to cultivating the extraordinary within themselves.