How Many Different Types of Violins Are There?

Published by StringOvation Team on October 31, 2019 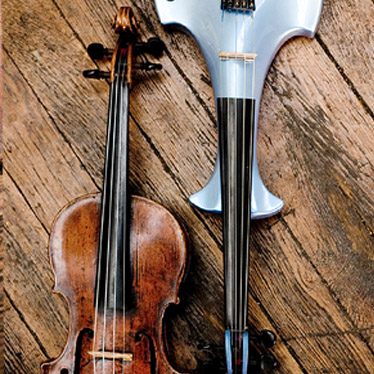 If there is one instrument that represents orchestral music to the general public, it’s the violin. After all, you never see anyone sarcastically pantomiming a harp in mock pity, right? What most people outside the music world probably don’t know, however, is how many different types of violins there are. Considering the subtle variations that can exist among violins that are otherwise similar, the answer can be complicated. For clarity’s sake, we’re going to break it down according to generally accepted categories.

Although several types of stringed instruments, such as the violetta, are considered the violin’s early ancestors, luthiers started making what we would consider fairly standard violins in the 1500s. The Baroque era violin had several differences compared to its more modern descendants, most notably a shorter fingerboard, a more shallow neck angle, and a smaller bridge.

In the late 1700s, and for the next few decades, the “classical” violin – not much different from the instrument produced today – began taking shape. In addition to higher string tension and a thinner neck, the classical violin would come to feature a chin rest. What became the modern form violin featured a slightly longer fingerboard to allow musicians access to higher notes and a heavier bass bar. This made increased string tension possible.

Country and bluegrass music couldn’t be more different from classical. Yet, violins are central to all three genres. The same goes for folk, Western swing, and others. So, what’s the difference between a fiddle and a violin? Not much – but there is a difference. It’s the way the violin is set up. Fiddlers generally prefer a flatter bridge than their classical counterparts. Unlike orchestral players, they also tend to favor steel strings over gut strings. Are you interested in playing fiddle tunes?  Check out our article here.

Electric violins have been around since the 1930s. Like most electric guitars, electric violins are solid-bodied. Unlike traditional violins, they do not have f-holes to broadcast the sound. Instead, they are constructed with built-in pickups that detect and transmit vibrations that are then broadcast through an amplifier. In addition to projecting a clear sound, this also allows for the use of effects like distortion or phasing.

You Can Go Semi-electric

For violinists who want the best of both worlds, there is a semi-electric or electric-acoustic violin option. This means fitting a traditional violin that has a sound box and f-holes with a detachable pickup. Some removable pickups can easily be added to classical violins, but others might require a little surgery to create an opening where the pickup can be inserted. Going semi-electric produces a sound that retains more of an acoustic tone than you get with a fully electric violin.

How About Five Strings?

Most classical violins have four strings tuned to G, D, A, and E. A five-string version includes a C string. Five-string violins are not typically used for playing classical music. The extra pitch is more often used by musicians who want to improvise. That makes the five-string ideal for the jazz, bluegrass, country, Western swing, and rock genres. Five-string violins usually have larger bodies than traditional violins to allow for greater resonance of that C string. Some musicians pluck the strings in addition to playing with a bow.

Is This a Violin?

There’s another contender for the list, but arguments can be made whether or not the Stroh violin is actually a violin. To be fair, it looks a lot like a violin and shares some characteristics. However, its 19th-century inventor, John Stroh, created an instrument in which the sound is produced and projected from a horn rather than a sound box. The horn creates a louder sound than a conventional violin.

Not counting the Stroh, we conclude there are seven different types of violins.

However, if you want to include the Stroh, no one will hold that against you! And if anyone ever asks you how many types of violins there are, you can say “eight” and then have fun explaining John Stroh’s interesting creation.