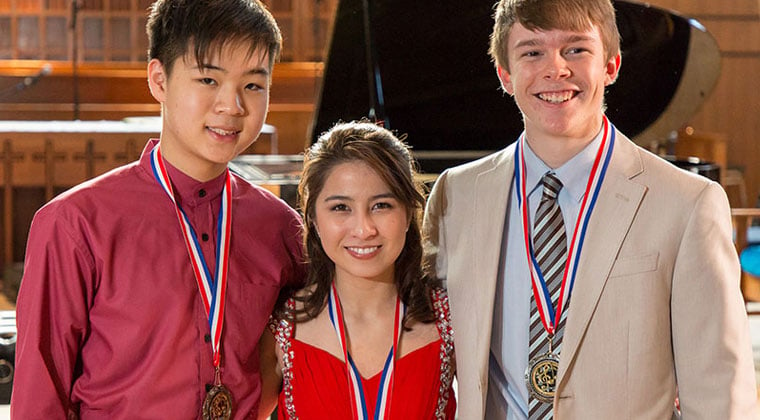 Late winter is already a busy time for so many people. Even so, there’s always time to apply to a violin competition or enjoy watching those who’ve already gone pro do their thing.

However, both applying to a competition and attending a concert can take some planning. Start thinking now about how you’ll use your time this winter to advance your violin career or education.

HHSO Youth Concert Competition (Hilton Head, SC) is a youth strings competition open to string musicians under the age of 18 who reside in the southeastern United States. Auditions are done via video tape submission and the finalists will be selected on December 1, 2018 – so get your tapes in! Finalists are invited to perform before a live audience on February 2, 2019 in Hilton Head, South Carolina. All the prizes include both a cash prize and scholarship to the Philadelphia International Music Festival.

Concours Musical International de Montreal (Canada) is focused wholly on violinists and attracts a global field of competitors, who must have been born between 1990 and 2003. This is a rigorous competition that includes three rounds of live performances for the applicants who are selected. In fact, you’ll have to submit four performance videos by the November 15, 2018 deadline. But if you win first prize, you’ll enjoy a hefty cash award plus a $50,000 career develop grant, a $20,000 instrument, and a $2,500 artist residency at Canada’s Banff Centre for Arts and Creativity.

Windsor International String Competition (Windsor, UK) has earned a global reputation as a prestigious competition in just its short 10 years of existence. The competition is open to violinists, violists, and cellists between 16 and 26 years old. Preliminary round video auditions are due by December 1, 2018.

International Georg Philipp Telemann Violin Competition (Poznań, Poland) takes place March 30th – April 1st, 2019, but applications are due December 15, 2018. Plenty of time to plan. This is a youth competition as applicants must have been born in 2001 or later. Expect to perform one of the 12 Fantasias for Violin without Bass by Georg Philipp Telemann. The rules also note that selecting works from other Polish composers isn’t a bad idea.

When you want to watch and listen instead of compete…

Do you prefer to just soak in the music this winter?  Take some time to check out the concert schedules of your favorite violinists to see where they’ll be. Here are some of our suggestions of violinists you may not have at the front of your mind.

Early pro, but really heating up is Sirena Huang. She’ll be in Newport News, Virginia in late January to perform Beethoven Symphony’s No. 7 with the Virginia Symphony.

Damien Escobar, from “America’s Got Talent” fame, will be the Austin Area Festival in Texas on November 24, 2018. This will be his first date back in the United States after a European tour.

The Asian-Australian duo TwoSet Violin are a music-comedy combo that took the web by storm. All their October and many of their November dates are near sold out, but some dates are still available. They’ll be touring mostly through the western United States and Canada during this time.

Alright, so we know you’ve heard of Nicola Benedetti. If you happen to be visiting Australia or New Zealand this November, you’ll be able to check her out live. If not, she’ll be back in the United Kingdom for some dates in December.

Which violinist is at the top of your “must-see” list? Let us know who inspires you.