A Musician's Guide To Italian

Published by StringOvation Team on April 26, 2017 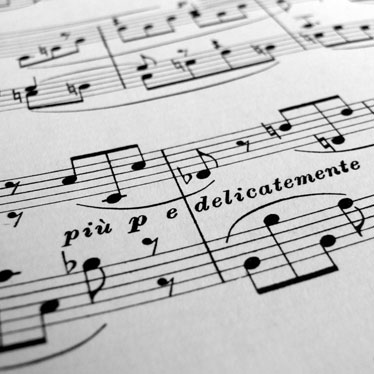 Let me throw a word salad at you:

And then let's sprinkle in some French seasoning: Ravel, Saint-Saëns, Fauré.

While this all sounds delicious, it was the Italians who dominated the field of the most important early composers and music theorists. In the 10th century, Guido d'Arezzo established the earliest systems of pitch notation and developed the clef system used today.  The most influential composers of the Renaissance and Baroque era were Italian – Palestrina, Corelli, Monteverdi – and they wrote in Italian.

Add to this that the first commercial printer of sheet music was Ottavino Petrucci, who was publishing the works of the best Renaissance composers in Venice, with his first publication printed in 1501.

Thus, when it came to settling on the lingua franca music – Italian won, and it's not even close. Here are some Italian musical terms and their origins:

Andante: Comes from the verb andare, which means "to go." It can refer to the musical direction to play in a moderately slow tempo, as well as being used to name a passage or movement meant to be played at that tempo.

Appoggiatura: In English, this is called a "grace note;" it's an embellishment or decorative note that leans on the main note, usually one step above. It comes from the verb appoggiare, which means "to lean upon."

Arco: This is the Italian word for "bow." No wonder it's used as a musical notation for the string performer to play the passage with the bow, instead of plucking the strings. Arco is the opposite direction from pizzicato, which is the direction to pluck. Pizzicato means "pinched." And yes, it's related to the Italian word pizza, which means "point."

Coda: A coda is the final measures of a composition. This Italian word derives from the Latin word cauda which means "tail." It's often used with the next terms.

da Capo (D.C.) and del Segno (D.S.): These musical directions tell the performer to either repeat the composition from the beginning (D.C., as capo means "head") or from the point of the notation (D.S., as segno means "mark"). You'll often see the notations "D.C. al Coda" or "D.S. al Coda," which indicate the performer should play the coda after the repetition.

Concerto: Comes from the verb concetare, which means to harmonize. A concerto is a composition for a solo or small collection of instruments set off against a full orchestra.

Legato: So this is an interesting one. Legato means "bound" in Italian. In musical direction, it's used to direct the performer to play the passage in a continuous, smooth, connected articulation. It's a style of play in contrast to staccato, which is direction to play each note in a distinct, choppy way. Staccato means "detached." A style of staccato play is spiccato ("distinct" in Italian), which is done using the middle of the bow to bounce lightly off the string.

Rondo: This is another one the Italians took from the French. Rondeau, which means circular, was used to describe 13th century monophonic couplets where each phrase repeated over and over. In contemporary musical language, rondo means a recurring leading theme.

Sonata: The precise details of what qualifies as a sonata has changed over the centuries, but at its core it refers to a multi-movement instrumental work. The word derives from the verb sonore, which means "to be played" and is differentiated from contare (cantata), which means to sing.

Tempo: In Latin, the precursor language to Italian, tempus means time. That morphed in Italian to tempo, which means speed. Most of the terms used to designate a certain speed are Italian as well, such as presto (very fast), accelerando (to speed up gradually), and adagio (slow), which isn't quite as slow as largo.

In this last section, we'll look at the various Italian terms used in music to indicate volume:

The beauty of the Italian language is just another reason to love playing music. The more you learn about music, the more Italian you'll be able to enjoy as well.