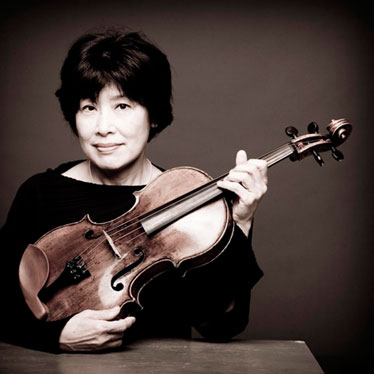 Although arguably less well-known than its more famous sibling the violin, the viola has its share of enthusiasts and virtuoso performers who beautifully showcase its exquisiteness. As a key component in orchestral and quartet ensembles, and as a wonderfully expressive solo instrument, the viola offers endless avenues of delight for those who excel in the musical arts, or for those who simply love music.

One such performer, Nobuko Imai, has achieved international recognition and success with the viola during her lifelong career. In her professional capacity she has earned a plethora of awards, accolades, and distinguishing honors. In this artist profile, we’ll explore the accomplishments of violist Nobuko Imai.

Born on March 18, 1943, Japanese violist Nobuko Imai began her instrument training at the Toho Gakuen School of Music in Tokyo. She continued to develop her skills by traveling to the United States to attend the Julliard School of Music and later excelled at Yale University. Her unique approach to the viola was one of the things that help set her apart from her colleagues. In particular, while studying J.S. Bach she suggested that the class utilize Baroque bows on modern instruments to help achieve sounds that were closer to the composer’s original intent.

As a soloist and chamber musician, Nobuko Imai has developed a reputation for whole-hearted enthusiasm and dedication to excellence, whether she is performing classical or contemporary compositions. Her Mozart and Beethoven chamber repertoire is widely acknowledged for its incredibly sharp execution, and this talent has enabled her to participate in many chamber projects with such masters as Yo-Yo Ma, Itzhak Perlman, Isaac Stern, and Pinchas Zukerman.

She has also toured with Midori Goto, and performed in trio concerts with Pamela Frank and Clemens Hagen, and Mihaela Martin and Frans Helmerson. As a former member of the Vermeer Quartet and the founder of the Michelangelo Quartet with Stephan Picard, Mihaela Martin and Frans Helmerson, she has regularly appeared at the Marlboro Festival in Vermont.

During her professional career, Nobuko Imai has appeared with many of the world’s most famous orchestras, including:

She was also one of the four violists celebrated at the International Viola Festival held by the Kromberg Academy, as a variation on their cello festival, playing her beautiful Andrea Guarneri of 1690, which she has used since 1988.

With over 30 recordings to date, Nobuko Imai has achieved commercial success with both classical and contemporary music styles, but her leanings towards contemporary compositions are more prominent. Her collection of 20th century pieces for viola and piano was released by BIS Records and became a best seller in Japan. A portion of that success is attributed to the inclusion of works by Toru Takemitsu, who has created compositions specifically for Imai that highlight the unique characteristics of the viola, which she so wonderfully brings to life.

She also returns to Japan several times a year, serving as Artistic Adviser of the Casals Hall's annual "Viola Space" project and the Casals Hall Ensemble. And, “In 2000, she founded an institution called the East West Baroque Academy, where young music professionals are able to gain experience in authentic early music style and performance practices” (bach-cantatas.com).

Some of her most notable awards include:

You can discover more about this exceptional artist by viewing some of her performances online like, Schumann Fantasy Pieces Op.73, for Viola & Piano, Nobuko Imai & Albert Tiu, Mendelssohn:String Octet (with Yo-Yo Ma), and A.PIAZZOLLA : Oblivion, or by reading more about her here.