Published by StringOvation Team on August 16, 2017 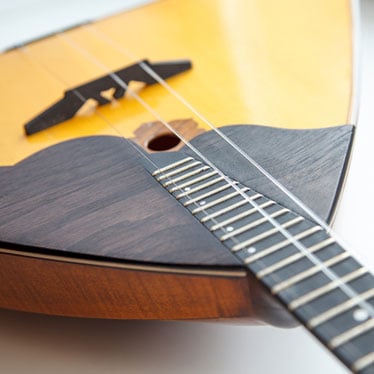 When we think of Russia and classical music, we think of the great composers like Tchaikovsky, Rimsky-Korsakov and Stravinsky. Russia’s place in the canon of Western classical music, both as composers and musicians is well established. It can be easy to overlook the rich variety of native Russian string instruments.

The balalaika (балала́йка) is a three-stringed instrument with a triangular body. The exact shape and size of the triangle can vary among different balalaikas. In fact, the balalaika is really a collection of instruments of different sizes that provide a different pitch, much like the variations among violins, violas and cellos.

The most common balalaika today is the prima balalaika, which has the second highest pitch in the family, followed by the balalaika secunda and balalaika alto. The musician holds these instruments like a guitar and plays them with their fingers and a pick. The smallest, highest-pitch balalaika, called a piccolo balalaika, is rare today.

The larger forms with deeper pitches have the familiar names of bass balalaika and contrabass balalaika. They are held like a guitar, but the body is so large, the lower point of the triangle rests on the ground, often with an end pin rod like you see on a cello. The musician may stand or sit.

The first known mention of the balalaika is in a Kremlin guard’s logbook from 1688, noting that two drunk commoners had to be stopped while playing balalaikas in the street. Not an auspicious first mention. It’s believed that the balalaika had long been a popular folk instrument in villages by that time.

A standardized form of the balalaika was developed by violinist Vasily Vasilievich Andreyev, with the help from a violin-maker in the 1880s. Andreyev composed works for the instrument and began playing the balalaika in concert performances. The instrument continued to evolve with a fully chromatic set of frets added a few years later. Eventually, a balalaika orchestra developed around the instrument, which included other Russian string instruments like the domra and gusli (see below) and some percussion instruments.

You can hear a modern performance of the balalaika here. Today it’s mostly performed as a solo instrument or in ensembles. Alexey Vitalyevich Arkhipovsk is a modern master of the instrument. You can hear him play some Paganini and other western classical works on the balalaika.

The domra (домра) is found in a number of cultures, including Russian, Belarusian and Ukrainian. It’s a string instrument from the lute family. The domra has a round body with either three or four metal strings. The forms of both versions were formalized in the late 19th and early 20th centuries. The three-string dorma is tuned to EAD, while the four-string domra has a GDAE tuning like a violin. The Russian version of the domra is typically a three-stringed instrument.

Like the balalaika, the domra is made in a variety of sizes to produce different pitches. The domra is held like a guitar and played with a pick and/or fingers. When played as part of the balalaika orchestra or ensemble, it plays the lead melody. One of today’s most well-known domra musicians is Tamara Volskaya, who has been named a Merited Artist of Russia. Here is a recent performance of her playing “Flight of the Bumblebee,” accompanied by a contrabass balalaika and bayan (a Russian accordion).

The gusli (гу́сли) is considered Russia’s oldest-known multi-string instrument, mentioned in Greek writings as early as the 6th century. Its origins are unknown, but it’s believed that the gusli, a zither-like instrument, is related to the ancient Chinese instrument, the guzheng.

Gusli that have been recovered from various archeological digs have had anywhere from one to 12 strings. The strings are graduated in length and tightened around a rod to vary the tension. There’s no bridge on a gusli. Like a zither, the instrument is placed so the strings are horizontal.

The body of the gusli is typically either helmet-shaped or wing-shaped. In some cases, a wing-shaped gusli may be held like a guitar, placed flat on the musician’s knees, or before the musician. It’s also compared sometimes to a small horizontal harp. Olga Glazova is a popular contemporary musician and you can see her play the gusli here.

If you’re curious about what a full balalaika orchestra looks and sounds like, check out the American Balalaika Symphony. With 50+ musicians, the symphony performs a collection of Russian folk music and classical works.