What is Considered a String Instrument?

Published by StringOvation Team on January 14, 2020 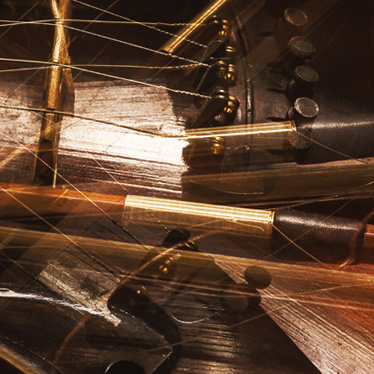 The string instrument family has the most significant number of "children" than any other group of instruments. Worldwide, there are more than 300 different instruments that are considered part of the string family. These range from the single-stringed diddly bow, which originated here in the United States and contributed to blues music, to the 88-stringed piano, which is considered both a string and a percussion instrument.

The Encyclopedia Britannica defines a string instrument as:

"…any musical instrument that produces sound by the vibration of stretched strings, which may be made of vegetable fiber, metal, animal gut, silk, or artificial materials such a plastic or nylon. In nearly all stringed instruments, the sound of the vibrating string is amplified by the use of a resonating chamber or soundboard. The string may be struck, plucked, rubbed, bowed, or, occasionally blown. In each case the effect is to displace the string from its normal position of rest and to cause it to vibrate in complex patterns."

If you were born in Europe or the United States, the string instruments you are most familiar with are probably the guitar and mandolin, the piano, and those found in an orchestra. We'll discuss those in more detail in a bit. However, it's important to remember that even a hollowed gourd with resonant fibers strung across a soundhole (the original incarnation of modern-day banjos) has as much of a right to be called a string instrument as the most sought-after antique Stradivarius violin.

How Many String Instruments Are There?

The Wikipedia website lists more than 300 different instrument names, all of which fit the definition of "string instrument." That's because humans all over the world have created their own versions of string instruments using the materials they had at hand – and to fit the soundscape that was considered the most compelling or attractive to their ears. Some of these may only be used to play historic or culturally important music, using period-accurate instruments. Other string instruments have found a permanent place in the contemporary music scene of their homeland.

When we look at the fact that this incredible array of instruments was born from dozens of different countries and cultures – some bowed while others are plucked, strummed, or hammered – the 300+ number makes more sense.

The Evolution of String Instruments Through Time

Pictorial representations of string instruments exist in ancient civilizations ranging from Central Asia to Egypt, the Mediterranean, and Mesopotamia. In terms of physical evidence, the longest surviving string instrument is the remains from the Lyres (harps) of Ur. Fragments of these instruments were found in what was Ancient Mesopotamia and now contemporary Iraq. They date back to more than 4500 years ago.

Many variations of string instruments were built, played, and innovatively engineered throughout the Middle Ages. By the arrival of the Baroque period (1600 C.E.), the Byzantine lyra paved the way to a group of instruments called lira da braccios – the official forerunner of the modern violin. It is sometimes referred to as the grandfather of the contemporary violin. 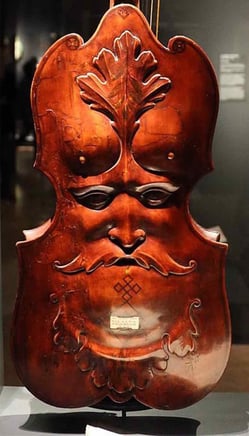 Variations in Instrument Size and Type

On the smaller end of the string instrument spectra are the violin and viola, as well as small autoharps. These instruments have notes that register in the higher frequencies, while the larger instruments make lower tones.

The string instrument family is divided into three categories, and these determine the instrument shape and anatomy.

How Are String Instruments Played?

Most string instruments are plucked, bowed, or hammered.

String players across the world all use these same three playing techniques to create their beautiful music.

String Instruments From the East

While a string instrument's general definition remains the same, and playing styles are similar, there's no confusing the Japanese koto with a cello. Different cultures have certainly put unique stamps on their particular family of instruments. Many of these may be instruments you've never even heard of because they're primarily left out of the western music repertoire.

While there is no one way to categorize the sound of Eastern string instruments, they often have a lighter, airier, and higher pitch than western orchestral instruments. This is due to the materials. Eastern string instruments often have thinner, more flexible strings that can be manipulated to create more frequent note slides, or warble-like tones, that are common for the culture's music. The aural result is often complex vocalizations, which you may have noticed if you've ever listened to traditional Chinese or Indian music.

One of the most significant differences for Western ears is that Eastern tuning systems are different from Western tuning systems – including different note names and scales. For example, an Arab tuning system divides the western octave into 24 equal divisions, which means written notes include quarter tones. You may hear Eastern string instruments played tuned to the diatonic or pentatonic scale.

Here are some of the most common string instruments found in the Eastern hemisphere, many of which closely resemble the historic Lyres of Ur and ravanastrons in their construction and anatomy.

String Instruments From the West

All modern, western string instruments follow their lineage back to the lira da braccio, we mentioned above. From the baroque period through the 16th centuries to the classical and romantic eras, variations of string instruments were invented, experimented upon, and re-invented again. Musicians and luthiers continued to modify instrument design to improve the sound, ease of play, and consistent tuning – always in alignment with the sounds desirable in their country or culture of origin.

Throughout that evolution, some versions had three strings (most lira da braccios), and some had seven (the seven-stringed viola da gamba) until the permanent design of the four-stringed, fretless body we know today. These instruments are most commonly tuned according to the 12-tone chromatic scale unless a composition specifies otherwise.

The following is a list of the string instruments most likely to be found in a Western classical music orchestra.

1. Violin. Considered the baby of the orchestral string family, a full-sized violin is around 24-inches long, and the bow is slightly longer. The violin is played by resting the instrument between your neck and shoulder and then bowing the strings (although they can be plucked or struck if the composer or conductor calls for it).

Most orchestras have more violinists on their roster than any other type of musician. There can be as many as 30 of them, and they are divided into two groups: first- and second violins. The very first violinist holds an esteemed position in the orchestra, known as the concertmaster.

Some of the most famous contemporary violinists of the 21st century include Hilary Hahn, Lindsey Stirling, and Sirena Huang. You can also Click Here to read about additional famous classical violinists.

2. Viola. Slightly more substantial than the violin, the full-sized viola measures a bit longer than 24-inches and has thicker strings, so it creates a deeper sound. The viola is played the same way as a violin, tucked between the chin and left shoulder. Most orchestras have somewhere between 10 and 14 violists, and they almost always play the harmony.

Examples of famous violists of our era include Tabea Zimmermann, Richard O'Neill, and Nobuku Imai.

3. Cello. The cello looks just like the violin and viola, but it is notably bigger at around four-feet long. As a result, the player sits down and stabilizes the cello between his/her thighs. The cello is tilted back just a bit, with its neck resting on the musician's left shoulder. The cello's thicker strings make a sound that is considered to be the most like the human voice. You'll see anywhere from eight- to 12 cellists in an orchestra, and they play both melody and harmony.

Famous contemporary cellists include Han-Na Chang (who is also a conductor), Natalie Clein, and Gautier Capuçon.

4. Bass. Finally, the granddaddy of the orchestral string instruments is the contra- or double bass. It's also called a standup- or upright bass to distinguish it from the bass guitar. A full-sized bass is over six feet long and has much thicker strings than the other string instruments (excluding the piano). Basses are played standing up, with the neck resting on the left shoulder. Because the sound is so resonant, there are usually only six- to eight bass players in an orchestra, and bassists usually play the harmony or support the rhythm section. 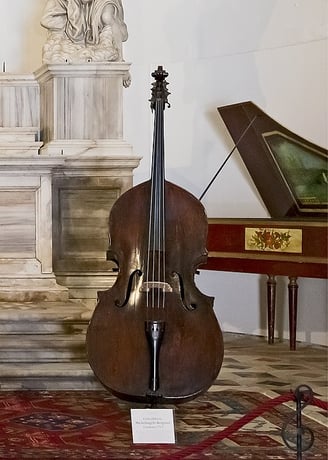 5. Harp. The harp is shaped a bit like the number 7 and has 47 strings of varying lengths. The harp's strings are tuned to the white notes on the piano keyboard. Standing at more than six-feet tall, and with more than two feet in width, harps have their own stand. The harpist sits down with the harp resting on his/her right shoulder to pluck the strings. Most orchestras have one or two harps.

Harpists don't typically gain the same level of fame as other professional string instrumentalists. However, contemporary harpists Joanna Newsom (like the Lindsey Stirling of the harp world), Jana Bouskova, and Isabelle Moretti are all celebrated by those who love the celestial sounds of the harp.

While guitars aren't typically considered an orchestral instrument, it's worth noting that guitars do join orchestras when the music calls for it. Classical guitar music and guitar-specific concertos have been composed and performed throughout the ages, ranging from the Baroque era and continuing into the 21st century.

String Instruments Are Found in Every Era and Genre

When we consider Western string instruments in their final design, we typically categorize music genres beginning with the Medieval and Renaissance eras. Then, we continue through the Baroque, Classical, and Romantic periods, arriving in the 21st century.

Some of the most famous composers of string instrument music from these Western musical eras are:

Music has always been at the forefront of innovation and change, and that means that string instruments have migrated far beyond these "classical music" eras listed above.

Today, you can hear string instruments played in any genre of music out there, from rock to rap and hip-hop to jazz. And, let's not forget that string instruments, particularly the fiddle, mandolin, and upright bass, are considered essential players in classic bluegrass and country music bands.

Are You Ready to Pick up a String Instrument?

The fact that you're reading this blog is a sign you may be ready to pick up a string instrument and start playing. Every musician and composer on this list started at the beginner level, which means you have every chance of being the next great string instrumentalist. Or, you may find that playing a string instrument becomes one of the greatest joys of your life, whether or not you pursue the professional path. What are you waiting for?

Visit your local music store and ask them to try out a variety of string instruments. Odds are, you'll resonate with one or two of them. Or, perhaps you already know which string instrument calls to you. The next step is to take it home and find the right teacher. You can also utilize free apps and YouTube videos to get started. Whether you're plucking, bowing, or striking those strings, you're on your way to being a bona fide string player.