Understanding The Different Roles String Instruments Play In An Orchestra

Published by StringOvation Team on May 24, 2017 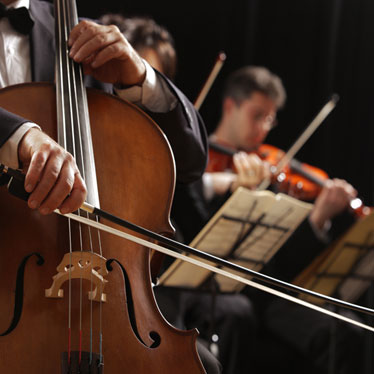 Orchestras are made up of four main sections: strings, woodwind, brass and percussion. Of these four, the string family is typically the largest section, often comprising half the orchestra performers.

The string section itself is divided further into four – or five – sections, depending on how you break it down. When looking at the string section by instrument, it has four sections: violin, viola, cello and bass. The wrinkle comes in since the violin section is divided once more into Violin I and Violin II, or first and second violin, sections.

Composers are free to use each section as their creative visions wish. For example, Wagner’s Die Walkure calls on ten performers each of first violins, second violins and cellos, joined by eight violas and six basscellos. In contrast, Milhaud’s La creation du monde, is written for only one first violin, second violin, cello and basscello, leaving the poor viola out entirely!

Early compositions, including many during the Baroque era, often used the four string instruments in a soprano-alto-tenor-bass (SATB) arrangement. That is, each string instrument had its role based on the note ranges they can reach:

While there's some overlap of range, the smaller bodies and strings of the violins and violas let them play in higher ranges, and the large bodies and longer, wider strings on cellos and basses give them a deeper, lower range.

Of course, composers don’t like being locked into rigid arrangements. As composers have become more sophisticated, they moved beyond a simple SATB ordering of the string instruments.

If being the expected star of the show isn’t enough for any violinist, here’s a list of compositions that show violinists to their best advantage.

Violas, slightly larger instruments than violins, put out a slightly deeper pitch and tone than the violin. As such, they’re perfect foils to play rhythmic or harmonic accompaniments to the violins, leaving the second violins free to contribute to the melody.

Yet that doesn’t mean the viola never gets to shine. Works such as Tchaikovsky’s Symphony No. 4 and Schumann’s Symphony No. 3 in E-flat are great showcases for the viola. Popular violist Richard O’Neil has a particular fondness for contemporary composers.

There’s no shortage of music which demonstrates the emotional expressiveness of the cello. Bach’s Cello Suites fill that need on their own. For cellists looking for some alternatives for the cello to star with a full orchestra, take a listen to Dvořák’s Symphony No. 9 in E-minor, Op. 95 (“From the New World”) or Cello Concerto in B-minor, or Shostakovich’s Cello Concerto No 2.

The basses, lined up so majestically behind the cellos have many names. Basscello. Contrabass. Double bass. Names that position these, the largest instrument in the orchestra’s string section, relative to the cello. For so long, and in so many works, the role of the bass has been to double the cello part. As a transposing instrument, the bass plays the cello line an octave lower. Hence the names. They play the bass line (funny how that worked out), the lowest line running through a performance. The basses literally ground the work and add depth to the overall sound of a performance.

However, the bass doesn’t always have to double the cello. It was during the Romantic era that composers really started to take note of the bass. In Rossini’s Duet for Cello and Bass in D-major, the two instruments each have their part. Beethoven also often composed independent parts for cello and bass, as have Verdi and Wagner.

A place for all strings

Each string instrument has its role and each is needed. Perhaps not in every piece, but that would be boring. Using variations in string instruments, how they’re used and how many are needed are part of making each work unique. What’s constant is that you can’t go wrong. If you pick the right string instrument for you, then you’ve made the right choice.