10 Romantic Composers You Need to Know

Published by StringOvation Team on February 28, 2019 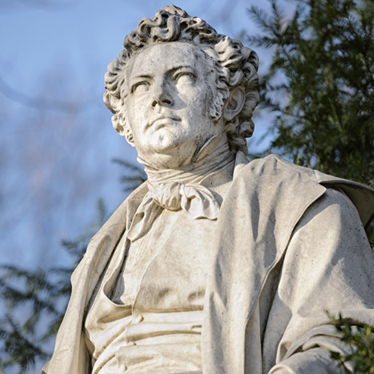 ists are problematic things. Many people reading this list will be incensed by who was left off it. This isn't the full list of every Romantic composer worth knowing. You do, however, need to know the ones shared here if you want to appreciate the Romantic Era.

Before getting into the official list, let's talk about two composers who bookend the Romantic Era.

Beethoven (1770-1827) bridges the Classical and Romantic eras. While many works from Beethoven's early period were done in classical forms, he was an originator of the Romantic musical language that sought to use music as a more personal emotional expression. Who can hear Beethoven's Ninth Symphony and not be swept up in its energy and passion?


At the end of the Romantic Era, we see composers who are starting to reimagine and play with Classical and Romantic formulas, bringing on the Modern Era. Gustav Mahler (1860 - 1911) is a perfect example of this transition. His Symphony No. 2 (The Resurrection), also an intensely emotional mixed symphonic and chorale piece, is full of harsh tones that were not well received in its early years.

On to the list of Romantic Period composers you need to know:

Niccolò Paganini (1782 – 1840), as a composer, is most famous for his 24 Caprices, which are more technical tours de force than Romantic compositions. For that, check out his Violin Concerto No. 2 in B Minor, Op. 7 and Violin Concerto No. 1 in D Major, Op. 6. However, Paganini stands out primarily for his "rock star" performances. The Romantic Period saw the popularity of classical music reach broader audiences who were drawn by virtuoso performers. Learn more about Paganini here.

Hector Berlioz (1803 – 1869) is one of the era's most influential composers and music critics. Not a typical combination. He wrote large scale works, many based on dramatic works from literature. However, his most famous composition, his Symphonie fantastique, was his personal rumination on unrequited love.


Fanny Mendelssohn (1805 – 1847), like many famous Romantic composers, composed primarily for the piano. However, her String Quartet in E-Flat Major is one of her finest works. Indeed, it (and Fanny) inspired the formation of The Fanny Mendelssohn Quartet, founded in 1989 to promote women composers and musicians. Here's her Fantasia in G Minor, a duet for piano and cello.

Fryderyk Chopin (1810 - 1849) wanted to do for piano what Paganini did for the violin. All of Chopin's compositions included the piano and most were piano solos, like his rippling Waltz No. 2 in C-sharp minor.

Robert Schumann (1810 - 1856) wrote about the philosophy and aesthetics of music, while composing primarily for piano. However, he also composed music for piano with string ensembles, like his Piano Quintet in E-flat major, Op. 44.


Johannes Brahms (1833-1897), one of the Three B's (with Beethoven and Bach) is the towering figure of Romantic Period composition. Some of his best works include his Symphony No. 1 in C Minor, Op. 68, Symphony No. 4 in E Minor, Op. 98, and Concerto for violin in D major Op. 77. Nor did he overlook the viola, composing Viola Sonata No. 1, Op. 120. Here's a recording of a famous performance by the Vienna Philharmonic of his Fourth Symphony:

Camille Saint-Saëns (1835 – 1921) was a conductor and pianist, in addition to composing great works. Unlike Chopin and Liszt, he composed plenty of great works for strings that didn't center the piano. Here is his Cello Concerto No. 1 in A Minor, Op. 33, performed by Mstislav Rostropovich.


His tone poem, Danse Macabre, is a staple of horror movies.

Pyotr Tchaikovsky (1840 – 1893) composed works from a wide scope of style and formats. Light, frothy works, such as Waltz of the Flowers from The Nutcracker, make him likely the first classical composer young kids hear. At the other end of the spectrum, his Symphony No. 6 in B Minor (Pathetique) is a profound exploration or the energy of life moving towards death.


Antonin Dvorák (1841 – 1910) is known primarily for his excellence in the Romantic Period genre of nationalist music inspired by local folk music. The Czech composer's Slavonic Dances was inspired by Brahm's Hungarian Dances. He was hired by the National Conservatory of Music of America in New York to develop a distinctly American folk-inspired classical sound. The result was the New World Symphony. Yet he was also full of string ensembles, including the occasional sextet. Here is his String Sextet in A Major, Op. 48:

Of course, this selection is here is only a small glimpse into the full scope of music the Romantic Period generated. For a fuller listen of more works by these composers plus those from another 15 amazing Romantic Era composers, check out our Spotify playlist "20 hours of the Romantic Era's." (You read that right – 20 hours).