Published by StringOvation Team on October 02, 2019 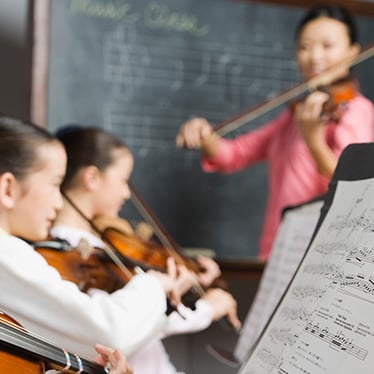 School is back in session. It can be exciting. It can also feel like you're about to start doing the same thing all over again.

Here are five music teaching strategies you can use that will challenge your students and you.

For some kids, their first babysitter was their parents' telephones. You can find numerous apps that help kids learn to play, train their ears, compose, and read music. We've put together lists of some of our favorite music teaching apps here, here, here, and here.

There are also apps directed toward teachers to track individual students' practice sessions and progress on other tasks.

Depending on the age of your students, many of them may already have experience with digital video and audio editing tools. Learning how to use more sophisticated digital audio workspace (DAW) tools will likely be of interest to all older students. Apple's GarageBand is a popular version of this sort of app.

Also, take a look at what music-related apps they're already using. Think about ways you could use any of them in the classroom.

2. Pull them in with the music they already love

Some students in a music class are genuinely interested in learning music. Some may not be. In either case, sparking interest and keeping them engaged is at least half the battle. Using popular music to capture their attention is a tried and true method. Now, to focus that attention in a way that gets them using the music skills you're teaching.

Start by playing a short clip of a song they'll recognize. Pick a clip that's a clear example of a certain musical forms. Ask them to talk about what they hear: tempo, melody, whatever musical elements that are relevant to what you're teaching. Then cycle through short clips of music from a wide array of genres, from classical to country to swing to whatever. Keep mixing in clips of songs you'd expect them to know. Make a game of how quickly they can recognize the song.

As they listen to and discuss more songs from different genres, you can start the discussion comparing and contrasting them.  They can also begin discussing what musical elements are characteristics of a specific genre, or the way an element is used.

For younger students: They probably aren't going to talk about different genres. You can still do this exercise focusing on recognizing the musical elements. You can find simple or simplified samples that include music they know, plus classical music.

For older students: Assign the task of creating a mixed-genre mashup.  Putting together a mashup will test their ability to put into practice what they're learning about how different music genres use musical elements.

Bring a personal dimension that expands their cultural horizons and continues to help them develop an understanding and ear for distinct musical forms.

Have each student prepare a presentation to teach the class about a lesser-known music genre. They can choose a kind from their background, like zydeco, Klezmer, or spirituals. Or they can pick music from an entirely different country or culture to their own.

For younger students: You can make it a "show & tell." Some options for them could be to bring in an instrument from home; share a song their grandfather or mother sings to them, show some dance steps (to music) from their background, or pick an instrument, song, or dance from a place they want to visit to share.

As they learn new music skills and concepts, let the students put them into practice with instruments and with digital audio tools (as is age-appropriate). Give them some general guidance or a short passage as a foundation. Then play a sort of a musical version of "Simon Says." Ask them to perform the passage faster, add some syncopated rhythm, switch keys, and so on. After they've gotten used to messing around with the passage, just let them freestyle with it.

Lastly, keep mixing up activities as often as necessary to keep them engaged. If they've been sitting for too long, switch to an activity where they can move around. If they've all been working independently, set up an activity for small groups.

The same applies to you. You need to keep mixing things up to keep yourself engaged. Draw on your artistic energy to create lesson plans that are fun for you and your students.