Sacred Music for the Spring Holidays

Published by StringOvation Team on March 23, 2018 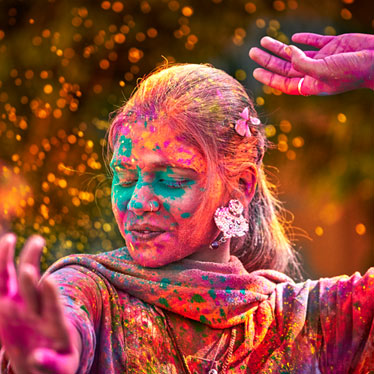 Historically, throughout Europe and its western civilization - independent and colonized - the term sacred almost always translated to Christian. However, as our planet has grown smaller - and diversity is celebrated, rather than ignored - sacred has a more all-encompassing feel.

For this reason, it's imperative that musicians look beyond the walls of the Judeo-Christian box, including musical compositions that represent spring-themed music across the spectrum of religious, spiritual, and cultural traditions.

The following pieces represent a variety of spring holiday traditions, beginning with traditional Easter and Passover pieces, and continuing through lesser known orchestral works - concluding a piece that is quintessentially American.

Perhaps this year, your spring concert program will integrate equally important pieces from other countries and cultures around the world.

The Seven Last Words of Our Savior on the Cross (Haydn)

This orchestral composition has also been written for string quartet. It was originally commissioned from Joseph Haydn to serve as musical interludes between the priest's Good Friday readings. It is dramatic, beautiful and a guaranteed audience pleaser.

The Seven Las Words of Our Savior on the Cross also provides a way for school orchestras and choirs to work together, including plenty of solos for exceptional and/or graduating students.

Paul Dessau was a German-Jew, exiled to Paris during WWII. He wrote Haggadah shel Psach during that time and it is a wonderful 20th century composition. The piece includes beautiful sections, originally debuting in the U.S., sung by the American Symphony Orchestra and the Brooklyn Youth Choir.

Paul Dessau was a prolific composer, and many of his pieces are written for strings. We also recommend his piece for violin and piano, Jewish Dance.

The Rite of Spring (Igor Stravinsky)

The Rite of Spring, composed by Igor Stravinsky, was first performed at a packed theater in Paris. Considered a completely avant garde piece for its time - and a clear representation of modernism - the combination of radical composition and equally radical ballet choreography incited concert-goers to riot.

The piece was inspired by pagan rituals honoring spring, which included sacrificial offerings to the gods. It is certainly a far cry from more traditional Baroque, Romantic, and Classical compositions, which makes it an interesting addition to any spring concert. Your school may prefer to perform one or more of these, Rite of Spring Themes for orchestra.

In late-winter to early-spring, between February and March, Hindus celebrate Holi (The Festival of Colors), a celebration of the god Krishna, love, and hope. Bollywood movies abound with Holi (Hori) songs, which are mostly upbeat, fast-tempo and can be filled with innuendo, both subtle and not-so-subtle.

The string instruments of India have a distinct voice, and are easily identifiable when combined with beautiful tabla percussion and decorative vocalizations. Performing a Holi song, such as Hori Khelan Kaise Jaoon offers a unique way to throw something completely different into your spring concert.

It also provides an opportunity to reach out into the Indian and Hindu communities for instrumental and mentoring support as the large majority of Holi songs are passed down by ear (aurally), rather than in notated, composition form.

Every spring, Buddhists celebrate Buddha's birthday, via a celebration called Vesak. The celebration honors the birth, enlightenment, and passing of Buddha and is celebrated all over the world at the full moon in the Indian month of Vaishaka (April–May).

One way to honor this celebration, which simultaneously features music from another culture, could be to play a famous Chinese classical song, such as the beautiful Moon Reflected on Second Spring, written by renowned Chinese composer, Huà Yànjun (who also happened to be blind!).

Again, this presents an opportunity to introduce and highlight other traditional Chinese string instruments lesser recognized in the world of strings. Otherwise, it is easily adaptable to western string instruments.

Finally, we'll leave you with a song about spring, for secular spring's sake. Aaron Copland is a modern composer, known by peers and critics as, "The Dean of American Composers." In the early 1930s, he composed Appalachian Spring, as a ballet commissioned by dancer and choreographer Martha Graham.

In addition to capturing the essence of spring - flowers, color, sun and blue sky - returning to a region known for bitter, cold isolation during the winters, Appalachian Spring tells the story of an early American pioneer family conquering the land - a plot that holds a sacred spot in the "American Dream."

Students will enjoy selecting from the wide range of movements - some fun and uplifting, others melancholy and dramatic - and there are scores for every level of musician.