T he most successful concerts or performances typically balance two things from the audience: their listening and their active engagement. Playing songs that are easy to dance to, or that audience members can sing along to, is a wonderful way to get the audience more involved with your performance. Plus, violinists who inspire listeners to sing will innately connect more enthusiastically with the music as a synergistic effect of their audience’s appreciation.

Songs That Encourage Audiences to Sing as You Play

Here are seven different styles/songs – all of which are available in arrangements suitable for violin. Most online violin sheet music sources offer multiple options, so you have the luxury of finding versions for beginners, intermediate, and advanced players.

Often and erroneously attributed to King Henry VIII, the music and lyrics to Greensleeves ("A Newe Northen Dittye of ye Ladye Greene Sleves") was registered in London back in 1580 by a man named Richard Jones. This makes more sense to music historians than the Henry VIII attribution. This is because, as Wikipedia states, “…the piece is based on an Italian style of composition that did not reach England until after Henry's death, making it more likely to be Elizabethan in origin.”

In either case, you can provide lyrics to the original Greensleeves, or to the holiday version, What Child is This, and allow audience members join in as you play.

Speaking of songs that are relevant for the holidays, we highly recommend playing at least one or two (or all) of your holiday music program as a sing-along option. We have several resources to support that effort, including, 10 Top Holiday Songs for the Violin, and, 20+ Violin Songs to Entertain Children During the Holidays.

This fun and rousing homage is sung to celebrate birthdays, retirements, personal/professional advancements, and promotions alike. You may find yourself honoring a fellow orchestra member’s or your conductor’s birthday, or For S/he’s a Jolly Good Fellow, can serve as surprise “thank you” to your music teacher(s) at the end of the spring concert series. In either case, it’s a fun sing-along tune.

Taylor Swift’s tune Our Song held its place at the top of the charts for more than 24 weeks, giving its lyrics plenty of time to settle in to the hearts of its fans and anyone else who listened to the radio during that period of time. Additionally, its upbeat and positive tempo encourages toe-tapping and clapping from those who may not know all of the words.

Is your music program looking for new and inspiring ways to spice things up and build a larger community following? Consider organizing and choreographing a flash mob. We recently posted a piece dedicated to holiday flash mobs, and around Halloween, Michael Jackson’s iconic Thriller is just the thing.

There’s no denying that Disney tunes have a tendency to stick around in the musical and lyrical vernacular (Let it Go, anyone?). The good news is that most Disney tunes have relatively easy melody lines, and are also available in orchestral arrangements. This means any violinists, from the beginners to the well-practiced, can find Disney song arrangements that meet them at their learning curve.

The songs are guaranteed to please audience members young and old alike, and they’ll happily sing along with you if you let them. Visit our recently updated post, Popular Songs for the Violin, for additional well-known, contemporary song ideas.

From jazz standards from the earlier part of the 20th century to Beatles hits from the 1960s, and 70s and Queen’s chart-toppers from the early 80s, so many oldies and not-yet-golden older pop songs will delight audience members of every age.

Play the songs your parents or your students’ parents grew up listening to, and the sing-a-long will be a success. Don’t forget that the best way to get your audience to sing-along is to choose songs that appeal to their age and life experience, and to provide pre-printed lyrics they can use to follow along. 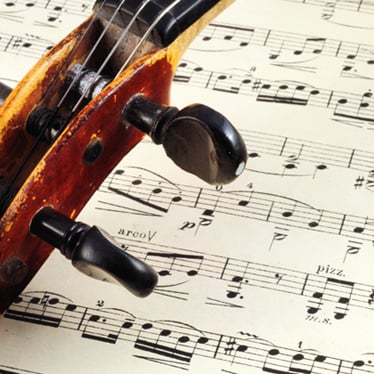