Published by StringOvation Team on December 07, 2018 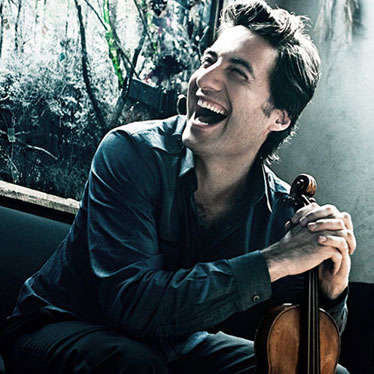 Often, the string musicians we “spotlight” here at StringOvation were born into professional music families - for example, bassist Charnett Moffett and violist Tabea Zimmerman. These individuals were launched into their professional string musicians from a young age. That wasn’t the case for the Russian-born violinist, Philippe Quint. In fact, until his teen years, Philippe was determined to become a soccer star or a professional chess player. He even fantasized about a career as an astronaut.

All this – even though he was an extremely talented violinist and had made his first orchestra appearance at age 9. Philippe Quint serves as an example of how important it is to find the right music teacher and/or music school because although Philippe was gifted, he didn’t seriously consider violin as a career until he was thirteen.

Proof the Right Music Teacher and School Makes All the Difference

At age thirteen, Philippe moved from his family home in St. Petersburg (then known as Leningrad) to attend Moscow’s Special Music School for the Gifted. It was there he is quoted to have found “the perfect ground” and knew that his future career path would be dedicated to the violin.

In Moscow, Philippe worked with world-renowned Russian violinist Andrei Korsikov. Eventually, he emigrated to the United States where he graduated from Julliard. In addition to Korsikov, Philippe notes that his most influential mentors are Dorothy Delay, Cho-Liang Lin, Masao Kawasaki, Isaac Stern, Itzhak Perlman, Arnold Steinhardt and Felix Galimir.

Like all noteworthy violinists, Philippe Quint has won considerable awards and accolades throughout his career, and has performed with the world’s best orchestras and conductors. And, like all professional musicians, he also has his own list of favorite performance pieces. One of his is the Violin Concerto in D Major by modern composer Eric Wolfgang Korngold. You can Click Here to watch and hear Philippe playing the concerto with the Orchestra de Mineria.

In a news interview, Philippe says, “I learned this piece as a student at Juilliard, and the reason I learned it is because I heard a live performance of this piece and I just immediately fell in love with it…But now, thinking back and having performed this piece probably close to 200 times or more, I think what the piece has is just this great amount of energy, just really, really positive energy. Like, everything about it is wonderful.”

That’s right! Philippe Quint is the first classical music artist to perform a leading role in a film. In Downtown Express, an independent film directed David Grubin and produced by Michael Hausmann (Gangs of New York, Brokeback Mountain and Amadeus), he plays alongside co-star Nellie McKay.

So, lucky Philippe Quint has managed to accomplish two claims to fame – violinist and actor – which shows how much the world opens to you when you find your true path and work hard to achieve your goals.

Stay True to Who You Are

Perhaps one of the most important lessons young musicians can learn from violinist Philippe Quint is to stay true to who you are and to cultivate a unique persona to reflect that. This is certainly the case for Philippe, who not only performs the most celebrated compositions of all times, but who has no fears about discovering formerly neglected works that he believes are great and seeking out works by contemporary composers he believes the world should hear.

We’ll leave you with some advice, directly from the violinist’s mouth, about the best way to be a great concert violinist, which Philippe shared in an interview with Violinist.com:

Who knows, perhaps you’ll be the next great string musician to blend your passions for music and film. StringOvation wishes you the best of luck along the way.